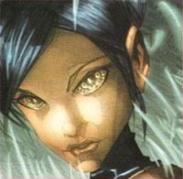 At the time of World War Two, Ana Soria became the first woman to see combat. Originally a member of the women's auxiliary corps, she was drafted into a special unit of the Marines to be part of a new super soldier program. Although none of the participants actually knew this, or why they had been selected. Ana, a mutant herself, seemed to relish the increasing difficulty of the training, often to the distaste of her male counterparts. This new super soldier program had been devised amid fears of how the US Military might stay the advancement of the Soviets and Japanese as the war drew on.

During the program the subjects were taken to the Island of Bikini atoll, lined up and blasted w/ radiation from nuclear weapons in an attempt draw out the latent mutant powers of the subjects. Most of which died, Ana however did not. After the desired results did not surface, the program was terminated and Ana found herself in a military asylum outside Miami. During incarceration, her mind collapsed from the strain of the events. While in the military she experienced a close relationship with Captain America. Since he could not come to her aid after being imprisoned, she felt betrayed.

After the war ended Captain America was presumed dead, so they threw away the key to Ana's cell. She escaped in the late 1950's, but by this time the military had forgotten about her. Later they came to understand the extent of Ana's augmented mutant abilities. She became the first mutant able to control a dormant 'insect gene' present in roughly one third of all humans on earth, left over from the point in evolution were man split from the insects. In taping into this long buried gene, she had become a new subphylum- Homo Insectus. This meant she could now control all insects on the planet and an estimated one third of all mankind.

Ana, now calling herself Queen, reappeared in New York and quickly amassed an army of drones from persons carrying the insect gene. After taking residence in a high rise she easily neutralised an early sabotage from Captain America and Spider-Man before taking them both prisoner. After waking to find himself inside 'the hive' Queen forcefully kissed Spider-man and expressed how she wanted him as her mate. As this happened the military and S.H.E.I.L.D. where outside waiting to hear word from Steve Rogers. Captain America and Spider-Man soon escaped to the roof, where they found Soria. Queen sent some civilians to their death and the wallcrawler tackled her for a second time. He was overpowered again before Captain America knocked her off the building.

In kissing Spider-Man, the Queen had passed over a serum which contained specific genetic material that would incite a transformation within him. Over the next few days Peter had begun to feel gradually worse. What initially felt like the flu quickly became apparent as being something far more sinister. A physical and mental metamorphosis had begun to take effect on Peter, and soon he had grown a coarse fur over his skin and his eyes had split into four. During this time an emergency briefing took place at S.H.E.I.L.D. regional headquarters led by Captain America, to discuss the threat the Queen posed and how they might deal with her. As the Queen herself relocated 'the hive' to the New York underground.

The Queen eventually tracked Spider-Man to an alleyway, half transformed into a human spider. She told him the change was inevitable, and after immobilizing him brought him back to the hive. Queen then made a live broadcast explaining that everyone had a limited time to evacuate a 600 mile radius of NYC before a chemical bomb that would destroy only human life was detonated. As S.H.E.I.L.D. and Captain America faltered over evacuation plans, back at the hive Spider-Man had now become a huge human-sized spider.

One of the captives in the hive was Professor David Jaffe, the man behind Ana's super soldier program and the serum passed over to Spider-Man from the Queen. Jaffe revealed that the mutation on Spider-man was never meant to take effect this fast and that no one could withstand a physical change in such a short time. Also in a bizarre twist that the Spider was pregnant. Soon after this the huge spider went into a rage before dying. Angered,Ana then set the device to go off in ten minutes. As Nick Fury and Captain America coordinated air support and the movements of members of the X-Men in the underground, Peter Parker re-emerged in human form from the spider carcass. Spider-Man dispatched of a drone that was about to detonate the device, and in the wake of a sonic scream from his foe managed to gather his remaining strength to defuse the bomb. As Queen was apparently killed in separate explosion.

The Queen more than any other foe, had a lasting and seemingly permanent effect on Spider-Man. Specifically his powers. Following his mutation for the first time his body could now produce an organic webbing from small holes in his wrists, making his famous web shooters obsolete. His Spider sense had altered significantly too in that he could now 'hear' or understand all insects or bugs around him. Finally his strength had been increased and he can now lift a maximum of 15 tons.

All of this was undone at the end of One More Day, when Peter made a deal with Mephisto. He lost his organic webs and his ability to talk to insects (which he never used anyway). Oddly, Peter's powers were altered during "The Other" storyline (see: Morlun and Ero), much the same way that they had been in this one. Marvel editorial obviously hadn't been paying attention.

Soria re-appeared years later, with the Jackal as her henchman. Together, they mutated Captain America and Kaine into man-spiders, released bedbugs infected with viruses that gave average New Yorkers spider-powers and planned to do the same to the rest of the country. When she caught wind of the fact that Eddie Brock (aka, Anti-Venom) was curing the infected in a local church, she sent Spider-King to kill him. (It was really Flash Thompson as Agent Venom, disguised as Spider-King.) After Agent Venom captured Anti-Venom, he turned him over to Reed Richards, hoping to use his curative powers to create an antidote. Richards was successful in doing so, much to Soria's rage. She took it out on the Jackal, killing him.

Meanwhile, the scientists at Horizon Labs were tinkering with the device designed to keep the spider people confined to Manhattan, which had the unfortunate side effect of interfering with Madame Web's (Julia Carpenter) visions and Peter's spider sense. Julia arrived, demanding that they fix the problem, which, being comic book scientists, they accomplished quite quickly. Julia and Peter's powers returned, but the Queen also received a power boost. Agent Venom tried to take her down, but she ended up throwing him around Central Park with ease. He was saved by the timely intervention of Steve Rogers, cured of his Spider-King personae. Thompson impaled Soria with Cap's shield, which caused her to mutate into a giant spider. The Avengers arrived to help, but it was Kaine that dealt the Queen the final blow. Well, that, and Iron Man, Storm, Gravity and Firestar all blasting her at once.

Afterward, Iron Man did a scan to make sure the giant corpse wasn't just a trick and found her to be the real deal.