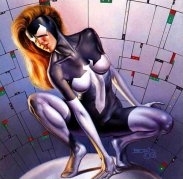 Led by her friend Valerie Cooper, with promises of a large income, Julia, who was in trouble financially at the time was led to become an agent for the Commission on Superhuman Activities (CSA). During her stay with the Commission they experimented on her using rare Amazon jungle plants and spider venoms granting Julia powers similar to that of Spider-Man.

During the first Secret Wars when the Beyonder pulled the city of Denver, Colorado into outer space, he also pulled in Julia who was living in the city at the time. Seeing the fighting taking place, now in costume, Julia volunteered to help with the super heroes against the Beyonder. After the battle she was brought back to the Earth along with all the other super heroes.

Julia worked with the super team calling itself the Freedom Force, which was sponsored by the Commission. During one mission she was involved in, the team was forced to arrest the Avengers on false charges. Feeling guilty about the way the Avengers were treated she decided to break them out of the Vault, causing her to have to leave the Freedom Force in the process.

Later, Spider-Woman joined the West Coast Avengers and fought against a group of super villains called the Death Web, made up of three super powers created by the Commission using the same procedures used to give Julia her powers. During their battles the Death Web terrorized Julia and the rest of her father, actually causing the death of her husband, Larry. But it was Spider-Woman who ultimately triumphed in the end, defeating the Death Web along with their leader, the Manipulator.

Once the Avengers decided to close down their West Coast team, Spider-Woman left the team begrudgingly and joined the spin-off team with other members from the West Coast Avengers forming Force Works. Soon after Force Works disbanded and Julia put away her costume to try and lead a normal life for herself and her daughter, Rachel.

After being a member of the Force Works, Julia left behind her life as a super hero to focus on raising her daughter but soon was attacked by Charlotte Witter, who was trying to gain the powers of both Julia and Jessica Drew, the first Spider-Woman. (Charlotte was a pawn of Doctor Octopus.) Witter desired to become the new Spider-Woman with their combined powers believing that with the powers of the previous Spider-Women, she'd be unstoppable. The attack left Julia in a wheelchair. After helping Madame Web, Jessica Drew and Mattie Franklin, the newest Spider-Woman to take down Charlotte, Julia went back to her life as a mother.

At some point, she regained the use of her legs and went back to being Spider-Woman. This let her be kidnapped by the family of Sergei Kravinoff, who were looking for "Spyders" to sacrifice. Mattie Franklin fell to them, as did Kaine and Madame Web. Julia survived the ordeal, but was changed by the dying Cassandra Web. She gained the old woman's blindness and psychic powers, forcing her to leave the title of Spider-Woman to Arana.

Julia kept tabs on Spider-Man and his enemies, especially the Jackal and his henchmen, Tarantula and Spider-King (the mutated Kaine and Captain America, respectively) when they returned. Julia seems to be very in tune with the "web of life" that courses through life in the Marvel universe, now that she is Madame Web. She seemed to go into shock when the Queen (a new ally of the Jackal) managed to change many New Yorkers into a new species, Homo aranus. Julia was concerned by this, as the web was only able to support a few spiders, not this many. She sensed that Spider-Man would be the ultimate savior in this situation, but her vision was inaccurate. It was Kaine that delivered the death blow to Ana. Afterward, she told him that he had a very special destiny.

Madame Web made a quick appearance soon after, as Spider-Man had used a time travel device and saw that New York would be destroyed in 24 hours and that he was somehow key to its destruction. She warned him not to involve the Fantastic Four, as they were busy with their own life or death situation.

Julia soon had visions for both Spider-Man (regarding Phil Urich and Kingpin) and the Scarlet Spider. She arrived in her astral form as Spider-Man was battling Michael Morbius, who had bitten a co-worker of Peter's at Horizon Labs. She warned Spider-Man that Morbius was the least of his worries and that he needed to return to Horizon immediately. She also told him that Silver Sable had not died in Doctor Octopus's underwater headquarters in Guatemala as he thought.

Her visions became progressively darker and more ominous, forcing Julia to send her daughter, Rachel, to Colorado to be with her grandparents. After putting Rachel on a bus at the Port Authority, Julia called 911, saying that a woman was in need of immediate medical attention and she was the woman. She soon had a psychic overload and she saw all points in the future at once. (This involved the Scarlet Spider, Hydro-Man, Doctor Octopus and his octobots, Elektra, Carnage, Captain America, Agent Venom (Flash Thompson), the Lizard, Morbius, the Hulk, the X-Men, Wolverine, Thor and Deadpool.) She panicked and arrived in her astral form at the Daily Bugle, warning Peter (and calling him Spider-Man in front of Norah Winters and Phil Urich) of danger to come. Peter, under the influence of Tiberius Stone's spider sense magnifying machine, fled in panic into the street. There he was picked up by Urich, the Hobgoblin.

Julia was soon at Columbia University Medical Center's coma ward and a doctor and officer were discussing her case. She had sanded off her finger prints and didn't carry any ID and only had an untraceable cellphone. She clearly didn't want to be found.