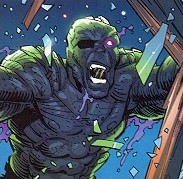 Las Vegas, July 3, 1957. The mobsters Freddie Carnevale, Santo Castellani, Jimmy "Little Man" Desanti, Louis Fredone, Tony Mascapone and their six lieutenants, as well as George Sims, lieutenant of another lord, Morris Forelli, got together, unarmed, to work out a peaceful solution to their conflicts. Since Sims was present, and he was known to be Forelli's right arm, none of the other bosses found Forelli's "delay" strange. Except Forelli found out Sims was working to one of the other families, and had helped to arrange a recent hit on one of Forelli's sons. Only when they saw the 4 gunmen show up did they realize they had been betrayed. That story became known as the story of the Vegas Thirteen, 6 mob lords and their lieutenants, plus the lieutenant of the executor, all killed in one night. Their bodies were buried deep into the Nevada Desert, never to be found again.

Present day: a gamma-bomb was detonated in the Nevada Desert, near the site where the bodies were buried. A leading scientist in that field of research, Dr. Henry Davis, theorized that gamma rays may have been instrumental in developing life on pre-historic Earth. He might have been on to something, because a green guy climbed out of ground zero, and walked away following some abandoned (and in very poor shape) railroad tracks.

The green guy calls himself Digger (because he dug out of a hole? Because the Thirteen were killed in the Golddigger Hotel and Casino?), and when he reaches New York, the body count starts. He starts attacking Forelli's men and establishments, referring to himself as "we.” (Amazing Spider-Man (vol. 2) #51)

He first struggles with Spidey in a night club, which is when Spidey starts wondering that his green skin might mean something more than just being weird - after he easily rips apart two cartridges worth of webbing, Spidey realizes that it's gamma-green, aka Hulk-green. After the fight, Digger flees into the sewers, feeling strangely tired.

Forelli, knowing Digger had come for him, contacts Spidey to protect him, paying him quite a deal of money to do it. He lets Spidey in on part of the story, but always omitting any involvement in it. While Spidey gets acquainted with Digger's background, Digger gets acquainted with all that happened between his death and rebirth. And sinks a boat carrying contraband for Forelli, killing all the crew. Spidey goes to Nevada, and visits the blast site. The haz-mat crews there are puzzled by the lack of several body parts and the marks of something digging it's way to the surface. Spidey finally realizes what Digger really is. He's is not one, not two, but all of the Vegas Thirteen, their bodies puzzled together and their minds inhabiting the end result, a gamma-powered zombie. (Amazing Spider-Man (vol. 2) #52)

Meanwhile, Digger realizes his families (not the mob ones, the conjugal ones) are all long dead. He goes after another of Forelli's operations, and this time his fight with Spidey is crashed in by 4 guys with machine-guns (deja vu), and barely hurt him, until the last shot. He brings the whole place down, and Spidey only manages to save the shooters. He turns them to the cops, collects some green goo Digger shed, and goes to Forelli to give him a couple of words, letting him know about his displeasure on the use of hired guns to stop Digger. (Amazing Spider-Man (vol. 2) #53)

”The Balancing of Karmic Accounts”

After analyzing the green goo, Spidey finds out that the only thing holding Digger together was the gamma radiation, since the differences between the cells of the Thirteen would naturally reject each other. Then Peter theorizes that when the Hulk turns back to Bruce Banner, it's because he's recharging, because turning into a green behemoth has a big strain on his system, and he needs to build up again until his energy levels are up, and adrenaline triggers another transformation. He thinks it must be the same with Digger, only since he can't turn human, he's constantly losing energy. He can rest, but it's just not the same. So all Spider-Man has to do is wear him out until Digger runs out of juice.

Spidey then goes to his new cop friend, Lamont, to ask for something we don't see and then goes to Forelli's house. He asks Forelli about the truth behind Digger's vengeance quest. Forelli doesn't come clean. Digger arrives, and tries to kill Forelli's daughter. Spidey intervenes, and Forelli tells Digger that his beef is with him: he ordered the execution, he got the approval of the other Families, everything. Digger tells him that his daughter will die anyway, and Spidey orders Forelli to leave.

Peter keeps fighting, and gives Digger no truce, between the green guy's threats of killing just about anyone. At one point, Spidey's grip of Digger's left arm almost tears it apart. Digger is starting to collapse. He runs to the sewers, and Spidey follows. Digger is glad that if he dies, he dies standing. And he indeed dies. Spidey said "you can't kill what's already dead", so he just fought until Digger blew up, body parts all over.

Finally, Spidey was wearing a wire since he last saw Lamont, so Forelli is busted for murder. Later, he used the money to fund the building the upcoming Gwen Stacy Memorial Library. And while speaking to MJ, he tells her it will always hurt. In between that, she asks him about his Hulk theory, and why it seemed Peter's given it some thought before. Peter explains that all heroes think about each other's weaknesses, may it come the day they have to turn on each other. She asks him if he could stop the Hulk, and he says he could, but he'd have to go all the way, he'd have to kill him, and he doesn't want to think about that. (Amazing Spider-Man (vol. 2) #54)

Years later, Digger returned as an enforcer for Richard Fisk, the Rose. Rose was trying to purchase a product from many assembled gangsters (Tombstone, Mister Negative, Crime Master, Hammerhead and others) but Tombstone wasn't impressed. Tombstone's hired muscle, the White Rabbit, offered to take care of Digger but he had her stand down. He agreed to meet with Fisk, but only in his own territory of Harlem. Spider-Man followed White Rabbit to the meeting, where she was selling a Green Goblin glider to the Rose's men. Spidey lounged on the top of an armored car, asking how many miles it had. Digger smashed through the roof of the car and grabbed him, to his shock. Spidey broke through his badly fused fingers as Digger accused him of killing him before. Spider-Man corrected him, saying that he wore Digger out and he melted as a result. One of Rose's goons yelled to grab the glider and run, which made Rabbit order her men to open fire. The car blew up and Spidey went to save a trapped bad guy while Digger and the other thugs ran off. Later, Digger oversaw the bombing of Tombstone's penthouse, made excessively destructive on Fisk's orders. (Amazing Spider-Man (vol. 6) #1)