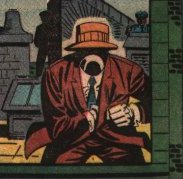 Nick "Lucky" Lewis was a known gangster before ever taking on the guise of the Crime-Master. Using Gordon Savinski, known as The Terrier, as his messenger, Lewis tries to coerce J. Jonah Jameson into selling the Daily Bugle to him. This plan fails when Jameson refuses and the Terrier is defeated by Spider-Man.

After one of his defeats to Spider-Man, the Vulture is sprung from prison by Lewis. Though he feels himself "master of the most successful crime organization in the city", Nick still fears certain challengers. In exchange for the release from prison, Lewis asks the Vulture to murder an up-and- comer named Wilson Fisk, later to be known as the Kingpin. This attempt is thwarted by the web-slinger.

With the "advent of costumed villains like Doctor Octopus, Electro and the Green Goblin", Nick believes that a criminal must flamboyantly stand out from the pack in order to take control of the mobs. Responding to this, he puts on a mask and calls himself the Crime-Master. In his first scheme as a mystery villain, Nick kidnaps the daughter of a neuroscientist named Carson who has invented a device called the cerebra-chip. The chip was intended as a cure for damaged pathways in the brain but could also be used to turn people in mindless, super-strong zombies. Crime-Master uses his hostage to force Dr. Carson to create a Super-Squad that he can use to commit crimes for him. Spider- Man rescues Dr. Carson and his daughter while also figuring out that a rewiring of his spider-signal receiver would jam the signal to the cerebra-chip. The Super-Squad is stopped but the Crime-Master remains at-large, his identity unknown.

The Goblin and Crime-Master plan a caper in which some of Lewis' thugs (Straker, Michaelson, and Jonson among them) go to Empire State University to steal the experimental Seismic Ray Device. When Spider-Man steps in, the Green Goblin decides he must lend a hand. This grandstanding by the Goblin makes the Crime-Master rethink their alliance. First he tries to kill the Goblin with Spider-Man. When that fails, he decides to cut the Goblin out of his action. For his part, the Goblin knows that the Crime-Master's exposing of J. Jonah Jameson could lead to his friend Norman Osborn. He vows to deal with the Crime- Master very carefully.

In the end, the Crime-Master takes matters into his own hands, recruiting all the top mob bosses through threats and coercion. He takes on various hoods directly, using his gun and his fists. Realizing that Daily Bugle reporter Frederick Foswell is onto him, Lewis tries several times to eliminate him. Instead he runs into Spider-Man who he defeats with a hidden tube containing a noxious gas. Thinking the web-slinger dead, the Crime-Master starts to move out of the shadows. He organizes a meeting of all the top mob men down on the waterfront and splits with the Goblin, trying to kill him in the process. The Goblin not only survives the attack but also captures Spider-Man. He brings the unconscious web-slinger to the waterfront meeting, showing up the Crime- Master at his own gig. When Spidey comes to and breaks free, a melee erupts involving the web-slinger, the Crime-Master, the Green Goblin, the mobsters and the police. When the Crime-Master makes a break for it, Spider-Man follows but he is again stymied by Lewis' nerve gas and the villain makes good his escape.

Later, the Crime-Master takes to a rooftop across the street from the Daily Bugle in yet another attempt to murder Frederick Foswell. But, by this time, Foswell has tipped off the police. The Crime-Master shoots it out with the police and is gunned down. The cops remove his mask to reveal Nick "Lucky" Lewis. With his dying breaths, the Crime-Master tries to reveal the Green Goblin's identity but dies before he can get the name out.