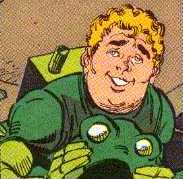 Vincent Patilio was a failed scientist, whose first breakthrough were the leaping coils he'd wear in his Leapfrog suit. He became a Super-Villain, but Daredevil foiled his plans several times, and he decides to retire as a villain. Enter Eugene, his son.

Eugene Patilio, a young boy with a ridiculous name, decides to use an even more ridiculous name, The Fabulous Frog-Man, to fight crime. He uses one of his father's costumes and goes out to find some crime to fight. He sees Spider-Man and the Human Torch having minor trouble dealing with Speed Demon. He attacks and defeats Speed Demon in a clumsy move. Call it illusions of grandeur, but Eugene actually sees some merit in his victory, so, the Fabulous Frog-Man has come to stay. Vincent doesn't like the idea of his son getting in danger, though.

A few months later, he hears that the the White Rabbit is busting fast- food chains, so he waits for her in Kwikkee Burger. He clumsily attacks her gang when they come in, and Spidey saves his sorry... hide. The Rabbit flees, but eventually it all winds up in a 3-way fight between Spidey, the Rabbit and the Frog, ending with the Rabbit crashing down. (Marvel Team Up #131)

His future spotlights feature being denied membership in Defenders right before they're attacked by the Walrus. He watches the Walrus collapse by indegestion (too many Kwikkee Burgers...) and gets the credit for the win. (Spectacular Spider-Man #185)

He also drops in when Spidey was fighting Thunderball and 4 thugs, allowing them to escape. Later, Spidey joins him with Spider-Kid and Toad, and the three form the Misfits. But the Misfits didn't last long, and Frog-Man was solo again, this time "helping" Captain America against Yellow Claw and his mutations (some of them were giant frogs...).

During the Acts of Vengeance, Frog-Man received repairs on his left boot from Gene Strausser at Damage Control. It is not known who if anyone he was battling when he sustained the damage. Knowing him, he might have just damaged his own suit by accident.

During a dinner at his house, with his father, his aunt and Spider-Man (Spectacular Spider-Man #185), they see on the News Bulletin that the White Rabbit and the Walrus are on a rampage, trying to attract Frog-Man to get even with him (Speed Demon and Yellow Claw felt that a team-up with the White Rabbit was disprestigious, but at least they got a good laugh before refusing). Spidey leaves, Vince prohibits Eugene from leaving, and leaves as Leap-Frog, but Eugene follows him as soon as his father's back is turned.

The Walrus knocks down Peter with his laugh attack (he says dumb things, others laugh, and he strikes while they're distracted), Vince arrives and announces himself as Frog-Man, the Walrus attacks, Vince knocks him down, the White Rabbit moves in to kill Vince, and the real Frog-Man arrives, at his own image, bouncing clumsily and falling on the Rabbit's back. Spidey takes care of an enraged Walrus, and Vince finally approves his son's crime fighting activity.

Well, okay, he isnt that lucky. He was captured by Alyosha Kravinoff and used like an ordinary animal, for Kraven's hunting pleasure. He was held on a boat with other animal-themed super criminals, such as Rhino, Vulture, Kangaroo (Hibbs), Swarm and others. Kraven would drug them and fight them to prove his superiority. He was stopped by the Punisher, but Kraven got away. (Punisher War Journal #15)

At another time, Eugene again tried to become Spider-Man's crime fighting partner, and "helped" him against the Kangaroo, whom Spidey had already defeated. Eugene again tried to make his case as to why he would make a great partner, when a new vigilante showed up....The Tenacious Tadpole! Frog Man was the Tadpole's idol, and he wanted to become his side kick. He demonstrated his tadpole tail attack, his "hellacious head-butt" (because, as a tadpole, he didn't have arms) and his slippery surface with his "gill goo." While Eugene tried to think of a way to get away from the Tadpole, Spidey took Kangaroo to the police. (Web of Spider-Man)

Eugene had to suffer through another kidnapping at the hands of a Kraven. Frog Man and many other animal themed criminals were taken by Taskmaster and Black Ant to Central Park, held inside by a force field. The masterminds behind the mass kidnapping were Arcade and Sergei Kravinoff. The group of bad guys were being hunted by wealthy elites, piloting robots. Spider-Man had also been taken but he was saved from the angry criminals by the attacking robots. (Amazing Spider-Man (vol. 5) #17)