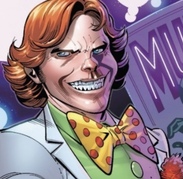 The son of a Texas oil millionaire (some accounts say a Beverly Hills businessman), Arcade killed his father and used Daddy's fortune to construct the first Murderworld. Now a thriving world-wide chain, Murderworld was designed to whimsically kill businessmen, political leaders, and anyone else Arcade was paid to murder. It can also be hired out as a training ground for mercenaries. Arcade charges one million dollars per assignment, which he uses to defray the exorbitant costs of his deadly theme parks.

Arcade ran into his first super-heroes when he kidnapped Spider-Man and Captain Britain, who in turn became the first people to survive Murderworld. Arcade took this personally, and began to track down super-heroes for no other reason than to off them. (Marvel Team Up #65)

Arcade was hired by Gaunt to kill the new Green Goblin, Phil Urich. The Goblin escaped but Arcade reported that he was a talented amateur. Gaunt passed the information along to his boss, Norman Osborn. (Green Goblin #10)

"Back on His Game"

Arcade laid a trap for Spider-Man and Black Cat when they were looking for a runaway named Dougie. They escaped from Murderworld, saved Dougie and captured Arcade. (Sensational Spider-Man (vol. 1) #29 and #30)

Arcade was hired by Frederick Foswell, Jr., the son of the Big Man, to kill Spider-Man and J. Jonah Jameson. After showing them a hologram review of Jonah's life, he ended the illusion and revealed them to be surrounded by the Scorpion, the Human Fly and Spencer Smythe's spider-slayer. After Scorpion escaped from Spider-Man, Gargan was kidnapped by Taskmaster and Black Ant, who were working for Arcade. (Amazing Spider-Man (vol. 5) #13)

Ultimately, Arcade's employer was Sergei Kravinoff, Kraven the Hunter. Kraven had hired Arcade for the purpose of building robots to be piloted by wealthy donors that wished to hunt dangerous prey. Arcade kept the donors entertained until Kraven arrived to announce that the hunt had begun. (Amazing Spider-Man (vol. 5) #16) The most dangerous prey were animal themed menaces, who were captive in Central Park and prevented from escaping by a force field around the park. The prey was made up of:

Arcade explained to the eager hunters how the robots worked. He explained that they were controlled by a control unit connected directly to their cerebral cortex. After the donors credit card info was entered, they could design and customize their robots any way they wanted. Weapons could be chosen, from primitive bows and arrows to advanced blaster cannons. They could even be modified with emblems and social media handles. He had a volunteer try on the glasses that connected the robot to his brain and then goaded him to attack the Iguana. The radio broadcast to the audience Iguana's mocking of the robot and Arcade taunted the donor to use the club against the creature. Soon the monster was beaten to death and others were eager to pay for their own robots. (Amazing Spider-Man (vol. 5) #18)

After the robots began their attacks, Arcade witnessed the Vulture use the naïve Gibbon as bait to draw the robots away. He sent Toomes a hologram inviting him to meet at the restaurant in the park, and told him the alternative was to stay with the hunter robots. After Vulture arrived, Arcade explained that Kraven had hired Taskmaster and Black Ant to kidnap him, throw him into a cage, and then release him into the nearly impossible to escape death trap. Vulture was about to lunge at him, until the heavily armed drones showed up. Arcade went on to say that the trap was perfect, and he didn't like it. He wanted the prey to have a slim chance of survival to make the game interesting.

He showed Vulture a device that would disrupt the functions of the robots, slightly improving his odds. The catch was that the device had a small area to broadcast its signal, so one robot would have to be destroyed at a time. However, as each robot was dismantled, the strength of the broadcast would grow, enabling more of the machines to be weakened at a time. It would require many of the captured criminals to attack to ensure the broadcast field would grow...and would cost many lives. Arcade chose Vulture to give the device to, after seeing him throw Gibbon's life away. Vulture agreed to the deal and after he left, Kraven contacted Arcade to see if he took the bait. Arcade informed him that he had and if Vulture was willing to kill his followers to save himself, then he'd have the opportunity. (Amazing Spider-Man (vol. 5) #20.HU)

Arcade soon met with Taskmaster, who was delivering the Lizard. (Amazing Spider-Man (vol. 5) #19)

Later, Arcade was in a lab with the creature called Vermin. It was once Edward Whelan until he was experimented on and became a human/rat hybrid. Arcade taunted the caged creature and Vermin bit his finger. Vermin told him that Taskmaster had double crossed Arcade and was working with the Lizard. Arcade panicked and ordered his men to find them. He repaid Vermin by injecting him with a formula that caused him to split into other Vermins. Now there were four others. (Amazing Spider-Man (vol. 5) #20.HU)

Spider-Man came to confront Kraven but was met by a hologram of Arcade. He told Spidey that Kraven was busy being mysterious and brooding, so he had something made up just for him. This time, Spider-Man wasn't facing just one Vermin but a dozen of them. (Amazing Spider-Man (vol. 5) #21)

Spider-Man had been saved by the Vermin by Kraven, who wanted to make a point to him. He saw Spider-Man and his power as something magnificent but held back by Peter's compassion. Kraven wanted Spider-Man to embrace the idea that sometimes death is necessary. He then summoned Arcade, who again appeared as a hologram. Arcade then explained that if Spider-Man killed Kraven, the robots would be shut down, the criminal captives would be freed, the force field would be lifted and drones would be sent to save Black Cat and Billy Connors from Kraven's son/clone. He then wished Kraven good luck dying. (Amazing Spider-Man (vol. 5) #22)

Arcade kept his word to lift the force field and release the captives, but didn't anticipate the group of heroes waiting for the chance to attack. The Fantastic Four, Doctor Strange, and the Avengers were on hand to round up the escaping bad guys. Arcade's control room was soon breached by Ms. Marvel. (Amazing Spider-Man (vol. 5) #23)