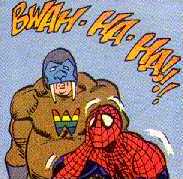 The Walrus was created when his Uncle Humbert, a janitor, had a go at some technology, and after many tries managed to give Hubert (the nephew) super-powers. Hubert was stupid enough to allow his uncle to experiment on him, so when his uncle pointed him toward evil ways, he gladly went on a spree of mass destruction.

He adopted the name of The Walrus, because he had the proportionate strength of a walrus. Since walruses are bigger than men, he's weaker than one, but still pretty strong. He first fought the Defenders, and he almost won (don't ask me how), but Frog-Man intervened and defeated the Walrus.

In his second appearance (last to date) he was contacted by the White Rabbit to form the Terrible Two, whose goal was set on killing Frog-Man, since he had defeated her as well. In fact, her idea was to form the Terrible Four, but Speed Demon and Yellow Claw, the other guys who Frog-Man defeated, didn't want to tarnish their reputation by associating with her.

Now, once again we have the Walrus being talked into something stupid, as he starts wreaking havoc in Brooklyn. The White Rabbit follows his lead, and tells the reporters who arrive to cover the story, that they won't stop unless Frog-Man surrenders to her. Spider-Man is dining at Eugene's house (Spectacular Spider-Man #185) and sees that on TV. He swings for Brooklyn, with Leapfrog secretly on his trail, and Frog-Man secretly on the trail of them both. Spidey dodges a punch from the Walrus, bragging about how fast he was, to which the Walrus responds:

"Yeah, well - Don't underestimate ME, pal! For your information, I've got the proportionate speed, strength and agility of a WALRUS!"

With this, both Spider-Man and I started to laugh. Since Hubert is smaller than a walrus, he just stated he's slower and less agile than any normal walrus. He gets mad and punches Spidey, who was too busy bent over laughing to avoid it. As Spidey gets up, Leapfrog (Vincent) arrives and announces himself as Frog-Man. He dodges the Walrus' attempts to punch him and knocks him down with a powerful hook. The Rabbit tries to kill Leapfrog, but she's knocked out by the arriving, clumsy, and out of control Frog-Man (Eugene). The Walrus gets up, and Spidey sees it as an opportunity to shine, since he's been surpassed by a couple of frogs on live TV: he taps him with one finger and the Walrus goes down for the second and last time tonight.

If Walrus survived this story, it’ll be a miracle. Animal-based criminals from all over New York were kidnapped by Taskmaster and Black Ant and taken to Central Park. They were then contained by a force field and attacked by robots built by Arcade. Arcade was employed by Kraven the Hunter and the robots were controlled by wealthy elites that wanted to hunt dangerous prey. Spider-Man was also in the park and was attacked by the Scorpion but was saved by the attacking robots. (Amazing Spider-Man (vol. 5) #17)