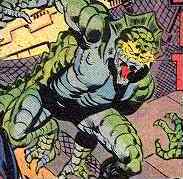 Curt Connors, aka the Lizard, attempted to use his own invention, the Enervator, to uncover the method by which reptiles are able to regenerate severed limbs. Surprisingly enough, when he used it to experiment on a marine iguana, things backfired. The Enervator transferred the energy of the Lizard persona into the iguana, causing it to take on a humanoid reptilian form, as well as the Lizard's powers and memories.

The Iguana hypnotized Connors to forget what had happened. It would stalk at night and return to is original size and cage by day. However, while in the accompany of some ESU and graduate students to the Bronx Zoo, the Iguana caused Connors to take it into a dark house for reptiles, in which it assumed human form. It encountered Spider-Man, and was driven off by blinding light. (Spectacular Spider-Man #32)

The Iguana knew that Connors, having regained his memories, would try to destroy it. The Iguana traveled to Connors' house on the Upper East Side of Manhattan, to abduct Connors' wife and son to use as insurance to prevent Connors from such attempts. Realizing that the Iguana might try this, Spider-Man traveled to Connors' house as well and fought the Iguana again. However, Connor had deliberately transformed himself into the Lizard to assist Spider-Man and defend his family. The Lizard also traveled to his house and attacked the Iguana. (Spectacular Spider-Man # 33)

After some battling, the Iguana and the Lizard decided they both hated Spider-Man more than they hated each other and decided to destroy him before resuming their conflict. However, Spider-Man had retrieved Connors' Enervator and used it against the two reptile men. Spider-Man siphoned the Lizard's power, turning him back to Connors. He fed the additional power into the Iguana, which initially made him more powerful, but caused him to burn with power and explode on contact with a water fountain. A normal sized iguana was seen as in the shadows as Connors and Spider-Man returned to ESU. (Spectacular Spider-Man #34)

The Iguana resurfaced years later, at the reptile house of the Central Park Zoo. Spidey was having difficulty dodging the creature's tail, as part of his life force had been drained by Morlun, which weakened him. The fight with Iguana was interrupted by a phone call from May Parker, who was worried after not hearing from Peter in days. When Iguana realized that his foe was paying more attention to a conversation than to him it snorted, "This! This is why homo sapiens must be exterminated! No manners!" Another phone call, this time from Ana Maria Marconi, interrupted them as Ana wanted to know where he was when he was supposed to be at a meeting to promote security technology to the Department of Corrections. Iguana tried to explain that he had a serious issue regarding the plight of reptiles, but Spider-Man ignored him and beat him into submission. (Amazing Spider-Man (vol. 3) #16)

Iguana was captured by the mercenaries Taskmaster and Black Ant on the orders of Arcade and Kraven the Hunter. He was soon released into Central Park with many other animal themed criminals, held captive in the park by a force field. Spider-Man was there but was also a prisoner. The confused criminals wanted answers as to why they had been taken but were happy to have a chance to kill their mutual enemy. Their chance didn’t last long, as they were attacked by a group of robotic Kravens. (Amazing Spider-Man (vol. 5) #17) He stood and fought the robots as the others fled but was quickly cut down by the machines. Unless something unseen happened, the Iguana perished. (Amazing Spider-Man (vol. 5) #18)