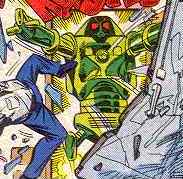 The Living Brain is a big green robot built by the International Computing Machines Corporation (ICM) and billed as the "greatest mechanical brain ever built". It is brought to Midtown High School by Mr. Petty of ICM to demonstrate its abilities to the students of Mr. Warren's class. Two shady workmen overhear the claim that the Brain can answer any question and decide to steal it to use it to pick winners at the racetrack. But Mr. Petty walks in on them when they are pulling their heist and, in the ensuing scuffle, one of the men bumps into the Living Brain's control panel, sending the robot on a rampage. It is only finally stopped when Spider-Man manages to reach the control panel and hit the cut-off switch just as it was about to flatten arrogant jerk Flash Thompson . (Amazing Spider-Man #8)

Years later, rendered obsolete and perhaps discredited by its rampage in the High School, the Living Brain is retired. Mr. Petty arranges for the robot to be donated to Midtown High School's science lab. There, his science-whiz son Steve Petty spruces the Brain up and sends him on another rampage to avenge himself against the bully who has been picking on him. Spider-Man battles the Brain once again, stopping him this time by getting the robot to punch an electrical system hook-up thereby short-circuiting itself. Steve Petty goes on to become the super-villain called Phreak-Out. (Web of Spider-Man #35)

The Living Brian returned from obscurity years later, as a member of the very short lived and very unimpressive Sinister Six. It's team mates were Shocker, Beetle II, Speed Demon, Overdrive (who was using the Big Wheel) and Boomerang. The crooks were stealing machinery that could control the weather when they were stopped by the all new Superior Spider-Man. Spider-Man fooled Shocker, Boomerang and Beetle into blasting the Brain, which took it out of the fight. Later, the device was taken to Horizon Labs to be studied. (Superior Spider-Man #1)

The Brain became Otto's personal assistant, performing scans and offering refreshing drinks. As the Green Goblin's army began their siege on Spider-Man's base of operations, Spider-Island 2, the Living Brain predicted that the iron structure was about to collapse. Spider-Man used the machine as a getaway craft and a submersible as the Goblins pursued them. After they arrived at Parker Industries, the device attempted to protect Otto from Monster, one of the Goblin King's new minions. It failed but survived the attack. (Superior Spider-Man #28) It held the unconscious Wraith hostage as Otto attempted to cure Monster of the Goblin Formula. (Superior Spider-Man #29)