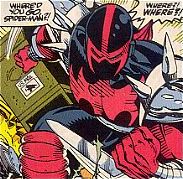 Wyndell Dichinson was a delinquent. He talked his younger brother into stealing with him, but on Richie's first robbery, Spider-Man caught them both. Wyndell swore revenge, and Richie chickened out (as usual). Richie told everything to the cops, and Wyndell had to pay a huge bail. After that, he fled leaving his brother to face justice alone.

Wyndell went to Eastern Asia, where he became a mercenary. He didn't last long in that line of business, because the drug market paid better. In Thailand some guys performed experiments on him (it isn't very clear what) that made him stronger. He made the service they asked for in return, dressed in armor and came back to the States to watch over a drug shipment. Oh, and he dubbed himself "Bloodshed". As if we needed another "blood"-something, or something-"blood" in the Marvel Universe.

His problems started when the coast guard approached the ship. He then had a sudden access of Han Solo Syndrome and threw the drug overboard. His boss, mobster Phillipe Bazin (better know as the arch-nemesis of DarkHawk) wanted to be refunded, and demanded 1 million dollars in 3 days, or he'd send a pack of bounty hunters after him all over the galaxy... err... sorry, wrong movie. Or he'd kill Bloodshed, I meant. So he decided to approach his brother, Richie. Richie's sentence had been held due to him being a minor, so he went back to school and graduated, and now had a respectable job in the stock market. Who'd be better to get the million dollars?

Spider-Man Unlimited #4 (flashback) - After being given this ultimatum, Bloodshed encountered Nico, Bazin's right-hand man. Nico made it clear to Bloodshed that if he failed to collect the money, he'd be dead.

Of course, after a couple of run-ins with Spidey, after Richie overcoming his fears (by rejecting his brother's extortion and by saving Spider-Man's life), Wyndell not only didn't manage to get his money, but he didn't manage to have his revenge either. He got beaten by Spidey, who sent his sorry neck to jail.

Spider-Man Unlimited#4 (flashback) - Although Bazin was later killed in a confrontation with his enemy Darkhawk, Bazin's men made several attempts on Bloodshed's life in prison. He finally gave in, and was convinced by Ricky to testify against Bazin's empire, gaining the protection of the Witness Relocation Program. Bloodshed agreed, but only if he was given protection by Spider-Man as well.

Spider-Man Unlimited #4 - While Bloodshed was being transported in a reinforced van, one of Bazin's men fired a bazooka at the vehicle in another attempt. Spider-Man captured the bazooka man, and a gang of Bazin's sent to aid him. Bloodshed, Ricky, and the WPP man, Lt. Vazquez made it out of the burning vehicle safely, and check into a hotel. But waiting in Bloodshed's room was his costume, somehow recovered by the police by Nico, who left a threatening note. Nico also poisoned a meal sent up to him. While Spider-Man and Vazquez checked the food, Wyndell changed into his Bloodshed costume and broke out, intending to find and kill Nico first. Spider-Man followed, and the two fought Nico's men at his base, but Nico escaped, and blew the building up. Spider-Man escaped, but he could find no sign of Bloodshed. Unseen by Spider-Man or the police, Bloodshed emerged from the shadows, discarded his costume, and set off into the night, intent on one day finding Nico, and settling the score.

Wyndell currently remains at large, and is lost in the limbo that is "The Realm of the Forgotten Characters". As far as I (Henrique Ferreira) am concerned, he'd only be better if he were to be killed by Scourge. That I could live with. There are too many armored-freaks in the Spidey-verse, and Web of Spider-Man was responsible for many of them. Of course, if he returned without the costume, and without the stupid name, it might not be bad. Then again, who cares about an 8-year old grudge between the right-hand man of a dead minor mobster and this guy?