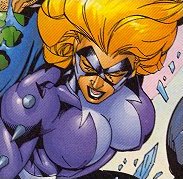 Mary MacPherran was a smalltime grifter from Denver, Colorado. She was known as "Skeeter" because she was as small and insignificant as a mosquito. As a result, she used to "be the scrawny one who got her face rubbed in the dirt". When the mysterious Beyonder assembled his Battleworld out of different pieces of different planets, he included a chunk of suburban Denver. "Skeeter" was among the people within that suburban area. Somehow, she came to the attention of Doctor Doom who was transplanted to Battleworld along with other super- heroes and villains. Doom used his genius and the alien technology available on the planet to endow "Skeeter" with almost incalculable super-strength while adding a foot and a half in height and giving her a Playboy centerfold body. (Doom turned "Skeeter's" old Denver buddy Marsha Rosenberg into Volcana in the same experiment.) Drunk with her new power and body and still carrying a chip on her shoulder, "Skeeter" took the name of Titania, donned a skimpy costume that shows her to best advantage, went looking for a fight and encountered the Absorbing Man. But no amount of taunts or threats would induce the Absorbing Man to fight her.

Instead, as a member of the Secret Wars super-villains, Titania goes into action against various Marvel super-heroes. Her most successful battle is with the She-Hulk. Titania gains the upper hand and then, with the help of Doc Ock, Wrecker, Piledriver, and Absorbing Man pounds the She-Hulk into a coma. (She- Hulk, of course, recovers.) High from this victory, Titania has the misfortune to run into the Amazing Spider-Man. Although she is many times stronger, Titania cannot cope with Spider-Man's speed and allows the wall-crawler to defeat her. Humbled by this, Titania submissively puts herself in the care of the Absorbing Man. They decide they want nothing more to do with the Secret War and sit the rest of it out until they can be sent home.

Back on Earth, Titania and the Absorbing Man join the Masters of Evil. Their first assignment is to free Moonstone after her capture by the Avengers. However, when Baron Zemo (the leaders of the Masters of Evil) organizes his plan to attack Avengers mansion, he leaves Skeeter and Crusher out of the assault. While killing time, Titania decides to rob Gino's Fine Jewelry store. Her subsequent battle with the police draws the attention of Spider- Man. Still terrified of the web-slinger due to her defeat on Battleworld, Titania runs. Later, at LaGuardia airport, Titania encounters Spidey again and is still so flustered by his speed that she calls out for help from the Absorbing Man. When it appears that the web-slinger is defeating Crusher as well, Titania's concern for her boyfriend overcomes her fear and she attacks. The battle, however, is halted by Crusher picking up an airplane and threatening to kill everyone on board if Spider-Man doesn't let them escape.

The duo finally draws an assignment from the Masters of Evil. They are instructed to go to the hospital and make sure Hercules (who has been brutally beaten by the Masters) is dead. Only Ant-Man and the Wasp are there to protect Hercules but they prove to be enough. After sending ants to attack, stinging Crusher in his human form, and shrinking Titania down to wasp size, the two tiny Avengers win the battle with relative ease. Titania is imprisoned in the penitentiary for super-villains called The Vault.

Sometime later, Tony Stark decides to destroy all armor which are using his Iron Man designs. One of his stops is the Vault where his inventions are used in the armor of the prison guards known as Guardsmen. As Iron Man, Stark succeeds in erasing his work from the armor but causes a power failure in the process. Titania takes advantage of this and escapes with Mr. Hyde (after punching out Armadillo to keep him from following). Captain America, known as The Captain at this time, manages to subdue Mr. Hyde but Titania defeats Cap's super-human colleague D-Man. Later, D-Man has an opportunity to renew the fight but chickens out and lets Titania escape.

Titania makes her way to Washington D.C. where she attacks She-Hulk four times in rapid succession. She loses all four times. In the end she promises She- Hulk never to bother her again and goes quietly back to jail.

Somehow freed once again, Titania joins up with the Wizard, Klaw, and Hydro- Man to form the new Frightful Four. They attack the Fantastic Four, only defeating them with the help of Aron, a rogue Watcher and Dragon Man. The Fantastic Four win the rematch but Aron ends up imprisoning both FFs. He keeps them all in suspended animation (frozen at absolute zero) and creates clones of the FF to have them act out adventures that he wants to see. In the end, the two FFs are freed and Aron chooses to follow the adventures of his clones by freezing them and watching their dreams. As a service to the real FF, he whisks the Frightful Four back to the Vault.

Again Titania escapes in a general jailbreak; this one brought about by the Wizard with the help of Loki, the Norse God of Evil. Loki has concocted a plan known as Acts of Vengeance. The idea is for different super-villains to take on other super-heroes than the ones that usually defeat them. Teamed up again with Dr. Doom, Titania expresses an interest in going after She-Hulk again but Doom tells her she must battle the Amazing Spider-Man. Titania is still terrified of the wall-crawler but Doom literally puts a chip on her shoulder that turns her fear to rage. She attacks the Daily Bugle, easily taking care of the Puma in the process but has the misfortune to run up against Spider- Man when he is imbued with the power of Captain Universe. The web-slinger unleashes the power in one mighty burst that knocks Titania unconscious. This fight does succeed in ridding her of her fear of Spider-Man, however.

On her way back to the Vault, Titania is again freed, this time by Graviton who also releases the Trapster and the Brothers Grimm. All were defeated by Spider- Man in his Captain Universe phase. Now that he has lost those powers, the villains (joined by Chameleon and Goliath) want a crack at him again. Amazingly, Spider-Man defeats them all. Titania is defeated when she is hit by a speeding bus.

Back to the Vault again, then somehow escaping again. Ever the joiner, Titania hooks up with Superia's Femizons to battle Captain America and Paladin. This doesn't do her any good. So, back she goes to the Absorbing Man, tracking him down in the middle of his battle with (the Eric Masterson) Thor. When Crusher thinks Titania has been badly hurt by a blow from Thor's hammer, he admits his love for her, implying that he'd like to try to settle down and go straight. Titania comes to and tells Crusher that she loves him, too. Thor walks away, giving them a chance to start a new life.

Crusher does his best to tread the straight and narrow but Titania goes back to robbing jewelry stores. Trying to scare her straight, Creel makes a deal with Thor that involves the Golden Bull on display at the Guggenheim. Things get complicated when Spider-Man and Code Blue get involved but ultimately Titania's love for Creel tames her once again.

In spite of this, Titania still finds time to hang out at the AIM Boca Caliente super-villain gathering and team up with the Abomination and Gargantua to take on the Town Called Hulk. But soon after, she comes to her senses and agrees to marry the Absorbing Man. They have a big wedding that lots of super-villains attend.

But still they can't seem to stay out of trouble. They adopt the guises of Thunder Girl and Lightning Bolt to try to earn Norman Osborn's reward for capturing Spider-Man. They get taken in by Spidey and Daredevil. They slip into occasional robberies. And Titania can't seem to keep away from She-Hulk. She keeps fighting her. She keeps losing to her.

Then Skeeter contracts cancer. She and Crusher have no health insurance so they move from the hospital to an abandoned building. Titania is a shadow of her former self, though still extremely strong. Thor helps to provide doctors for her case and Titania survives, though much reduced. She and Crusher are still living in a condemned building but their villain days appear to be over. When Thor, now Lord of Asgard, addresses the UN, Crusher Creel shows up, bows to him, and promises to repent.