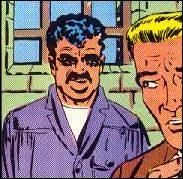 Blackie Gaxton was a Philadelphia Mob Leader who employed Bennett Brant, the brother of Betty Brant, as his lawyer. Bennett is deep in debt with Blackie for losses he incurred while gambling. When Blackie is arrested and temporarily held at the Philadelphia Courthouse, he uses those debts (and a phony promise to release Bennett from all responsibility) to intimidate the young lawyer into arranging for his sister Betty to pick up Doctor Octopus upon Ock's release from jail. Betty obligingly drives Doc Ock to Philly. Ock obligingly uses his powers to tear the bars off the windows of Blackie's cell for a promise of one hundred thousand dollars.

While Blackie is escaping, his men pick up Betty and Bennett Brant and take them to an old tramp steamer sitting at the docks. Blackie and Doc join them soon after. Blackie plans to wait for a launch that will pick him up and take him out of the country. He has no intention of letting Bennett Brant go.

Thanks to a spider-tracer, the Amazing Spider-Man arrives on the scene and dukes it out with Blackie's hoodlums. In the fight, Blackie reaches down to pick up a stray gun and tries to attack Spidey. The web-slinger fights back and, in the struggle, Blackie fires the gun repeatedly. One of the shots hits Bennett Brant who is shielding his sister. Bennett is killed by the bullet.

Betty immediately blames Spider-Man for her brother's death. The web-slinger is so enraged by this sequence of events that he relentlessly closes in on Blackie, wading through bullets and Blackie's men in order to get to the mob leader. With hoodlums draped all over him, Spidey lifts Blackie up and punches him so hard that the gangster goes sailing across the deck of the ship. He stays unconscious until the police arrive and cart him back to jail.

Having served his purpose of killing Bennett Brant (thereby making sure that Peter dare not reveal his identity to Betty), Blackie Gaxton is conveniently never seen again.