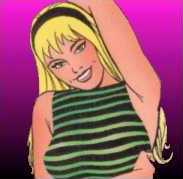 The Gwen Stacy clone was created by Professor Warren during the original clone saga. She walked into Peter's life after the death of the original Gwen Stacy, and caused no end of confusion. Peter saw the clone walking the streets and believed her to be an illusion created by Daniel Berkhart, the second Mysterio. It was only after she walked into the Daily Bugle offices and stunned Peter's co-workers that he came to face her. She was verified a real person after Ned Leeds ordered a DNA test and finger prints. Shortly after, Miles Warren made his first moves as the Jackal. She survived that storyline, and wandered off into the back lots of the Marvel Universe for a while.

She subsequently reappeared many years later - long before the return of Professor Miles Warren. Spidey found her being attacked by two guys in armor, in a flying saucer type craft. The clone escaped as Spider-Man dealt with the creatures, who disappeared in a flash of light. Mary Jane later found Peter at their apartment, looking through his photo album of Gwen pictures. Mary Jane told him that she knew she could never compete with Gwen (Peter even semi agreed to himself that he still loved Gwen)and Peter told her that she was the one he loved now. So it was awkward when the clone found them at their new apartment, after she had called Betty Brant (who was understandably surprised to hear Gwen Stacy's voice years after she had died) to find out where Peter had moved to.

Gwen was conflicted about Peter; she still trusted him but panicked after seeing part of the Spider-Man costume exposed under his shirt. Peter went after her, after MJ told him "Help her. And when you're done, come home to me with a clear heart--or dont come home at all." Peter found her and tried to find out what was going on but they were caught by the guys in armor. Spidey managed to jump through the teleportation field just before it closed. He arrived on the spaceship of a race of beings called The Celestials. The clone was taken to a device called a "gene tester," while Spider-Man dealt with the Young Gods and the ship's security forces.

After managing to survive the battle, Spider-Man rescued the clone from the gene tester and was confronted by the High Evolutionary. The Evolutionary wasnt really interested in Gwen Stacy, but in the clone. He wanted to know how a mere university professor had created a clone in such a quick amount of time. The answer was, he hadnt. Professor Warren, the High Evolutionary "presumed", had kidnapped a woman of similar age and genotype to Gwen Stacy and infected her with a genetic virus to make her appear to be Gwen.

The High Evolutionary was indifferent to whether or not Spider-Man and the clone believed him and transported them back to earth. Gwen refused to believe that she was yet again someone else entirely but her existential agony was ended by Daydreamer (later called Dream Weaver), one of the Young Gods. She had sensed the clone's agony while on the ship and used her powers of illusion to end the "illusion" in Gwen's mind that she was a clone. The young woman walked away, remembering nothing. Peter went back to MJ, telling her that Gwen was gone and had been for a long time.

"Joyce Delaney" returned at the start of the Clone Saga. Apparently, the High Evolutionary had been wrong or lied in his presumption that "Joyce" wasnt a clone, as she again looked and believed herself to be the original Gwen. Searching for clues as to what the Jackal was up to, Peter (wearing Ben Reilly's Scarlet Spider costume) looked up all of the available info on Warren at the Bugle's library. He found an article on one Dr Warren Miles (wonder how no one saw through that alias) and headed to the address in New Jersey. Miles stunned Peter with a taser and escaped with the Gwen clone.

Miles and the clone had been married for a while, but he had always known that one day a spider would show up. The two fled and Peter/the Scarlet Spider gave chase. Seeing that they were being followed, Warren Miles tried to weave through traffic to escape, only to crash into the side of the George Washington Bridge. All three were surprised by the appearance of the Green Goblin (Phil Urich), who snatched "Gwen" out of the car and flew her to the top of the bridge's pillar.

Peter raced to save "Gwen," while a frantic Warren Miles shot recklessly up at the Goblin. The Gwen clone fell from the pillar in the confusion, but was caught by the Scarlet Spider, who saved her by swinging down to catch her instead of snaring her with his web.

Miles, standing on his car and still in a panic, fell off of the side of the bridge. Upon finding the body, Peter realized that "Warren Miles" was just a clone of Miles Warren. Peter had only wanted to talk to him about what he knew about the whereabouts of his maker, a secret that he would have to wait for.

After the Jackal returned from his supposed death, Peter and Ben were desperate to know which of them was the real Peter Parker. Through a series of lies and manipulations, the Jackal led Peter to think that he was the clone and that Ben was the original. Feeling lost and hopeless, Peter was easily talked into thinking he was part of the Jackal's "family" of clones: Kaine and Spidercide being his "brothers." Jackal used Peter to find "Gwen" and to bring her to him.

He found her at an address given to him by the Jackal, and she readily agreed to come with him to see Dr Warren. Her memories of being a clone had begun to return after seeing her husband die at the G.W. Bridge. (Her memories had been erased by a supernatural being named Dreamweaver as an act of mercy. During this time she had been known as Joyce Delaney.) She and the Jackal had unfinished business.

They eventually found the Jackal and his henchmen at the Daily Bugle, where they planned to kill and clone the reporters inside. The clones would then be brainwashed to play down reports that a virus (the "Carrion virus," a biological weapon the Jackal created to wipe out mankind) was sweeping the globe, killing everyone it infected. A battle royale ensued, involving the Scarlet Spider, Spider-Man, Scrier, Spidercide and the Jackal.

The Jackal was stopped by Gwen, who intended to shoot him once and for all. She was momentarily distracted by Mary Jane, which gave Jackal time to push her aside. Unfortunately, he pushed too hard and she went flying over the edge of the Bugle's roof. She held on to a fallen broadcast antenna and dangled over the edge. Jackal shoved the Scarlet Spider out of the way to save her, but the antenna couldn't hold both of their weight and he fell to his death, Scarlet Spider managed to save Gwen, who left New York after all the commotion. She needed to leave to stop from thinking of what might have been. She has not been seen since.

It turns out that "Joyce Delaney" moved to London several years ago. She lived an empty life, knowing that she was still just a clone. That ended suddenly, when another Gwen clone shot her in her apartment from across the street. This new clone, called Eve, was the first clone of Gwen and was an imperfect copy. She confronted the Jackal after murdering "Joyce" and was killed when Jackal's base collapsed after a battle with the Tarantula, Kaine Parker.