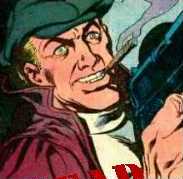 The Burglar makes his first appearance in the hallway of a Manhattan TV studio just as young Peter Parker (still dressed as Spider-Man and carrying his pants over his arm) steps out of his dressing room. The Burglar is being chased by a police officer who yells at Spider-Man to trip the crook up before he can get to the elevator. But a stuck-up Spidey refuses to help and the Burglar makes his escape.

Soon after, the same Burglar tries to rob the Parker home in Queens. When Ben Parker surprises him, the Burglar murders Ben and hides out in the old Acme Warehouse. Peter learns that his Uncle has been killed and goes to the warehouse, as Spider-Man, to capture the killer. He takes the Burglar out with one punch, only to discover that it is the same man he could have captured at the TV station. This event has influenced Peter Parker's entire life.

Years later, with Aunt May in a nursing home, the Burglar, now out of jail, rents the old Parker home and tears it apart looking for some hidden treasure. When he fails to locate it, he goes to the nursing home. There, he occupies the office of Dr. Ludwig Rinehart, and holds the psychiatrist at gunpoint. He reveals to Rinehart that his break-in at the Parker home years before was not random; that he was looking for something when he shot Ben Parker. Now he believes Aunt May knows where the valuables are. He plans to learn the truth and then kill her. He also reveals that the doctors in prison diagnosed him as crazy. (Ya think?)

Things get more complicated when it appears that Aunt May dies of a massive cardio-infarction. We see her body in a casket and they have a visitation for her and everything. But all is not as it appears because Dr. Ludwig Rinehart is actually Mysterio, the master of illusion. He has agreed to simulate Aunt May's death so that Peter will stop visiting. This will allow the Burglar time to shake the truth out of the old bird. After having Peter put off the scent, the Burglar tries to kill Rinehart. But the Burglar is not aware that Rinehart is Mysterio and is unprepared for the illusions that allow Mysterio to take away his gun and render him unconscious.

Mysterio keeps the Burglar tied up in the basement of the nursing home while he tries to discover what the hidden treasure is. The Burglar manages to break a nearby mirror and use a shard to sever his bonds.

It all comes to a head in Amazing Spider-Man #200 (January 1980) when Peter Parker finds the Burglar waiting for him in his apartment. The Burglar manages to knock out Peter (who, thanks to Mysterio, has lost his powers) by whacking him over the head with the butt of his gun. He takes a tied-up Peter to the old Acme Warehouse and the truth starts to come out.

Years before, the Burglar was a young convict who was paired up in a cell with Dutch Mallone, a notorious gangster. Dutch used to talk in his sleep about a treasure he had hidden in his home. The Burglar finds out by visiting the TV station on that fateful day that the home in question was eventually bought and occupied by the Parkers. With Mysterio having fled the scene, he has the real Aunt May in his custody. He brings her to the warehouse and faces off against Spider-Man.

In the end, an enraged web-slinger pulls off his mask and shows the Burglar that he is Peter Parker. The Burglar becomes so convinced that Peter will kill him for the murder of his Uncle Ben that he drops dead of a heart attack; frightened to death. And the treasure? Aunt May reveals that she and Ben found a box behind the wallboards years ago... but silverfish had eaten up all the contents.

Years after his death, the burglar's daughter, Jessica Carradine, arrived in New York with a grudge against Spider-Man. She dated Ben Reilly, not knowing that he was the current Spider-Man. She tried to forgive Ben after she found out his secret but the burning of the Daily Grind (his place of employment) and the ransacking of his apartmant led him to think that she was trying to destroy his life. (It was really Jason Macendale, the Hobgoblin.) They broke up and she has not been seen since.

As a central figure in Spider-Man's origin, the Burglar has made many other appearances in flashbacks and always appears in variant Spider-verses such as Spider-Man: Chapter One, Ultimate Spider-Man, and the Spider-Man Newspaper Strip.

As a side note, according to the third Spider-Man film, the burglar's name is Dennis Carradine. It is seen on his mug shot when Capt Stacy says Ben's killer is still free.