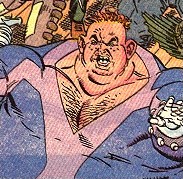 If Spider-Man can be believed, Critical Mass is Arnie Gunderson and he was in the same fourth grade class as Peter Parker. Already overweight, obnoxious, and evil, Arnie used to get his kicks by stealing Peter's lunch money.

Arnie grows up to become an extremely overweight evil mutant with the ability to shoot force blasts from his hands. Calling himself Critical Mass, he puts together a group of evil mutants known as his Band of Baddies. The group consists of Whiplash, Bloodlust, a guy who looks a bit like the Savage Dragon, and (for reasons unknown) the non-mutant dentist of Peter Parker who also happens to be the brother of the Burglar who killed Uncle Ben Parker.

The first thing the Band of Baddies do is to kidnap a powerful mutant girl and her father. They hide out in the Acme Warehouse, site of Spider-Man's capture of the Burglar, and hold the father at gunpoint in an effort to get the mutant girl to do their bidding. But Spider-Man and Wolverine crash the party and start a battle. Just when it looks like Wolverine is going to skewer Critical Mass with his claws, the mutant girl uses her powers to blow the entire building up. Critical Mass is apparently killed in the blast.