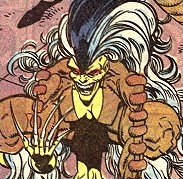 Bloodlust has never revealed anything about her past. In fact, she has never spoken at all. She is apparently close to Whiplash and has joined her as both a member of Critical Mass's Band of Baddies and the Femme Fatales. When Spider-Man and Wolverine break up the Baddies plan to abduct a powerful mutant girl, Bloodlust trades slashes with Wolvie, proving to be his equal. She is caught in the explosion caused by the mutant girl and is believed to be dead.

But Bloodlust returns with Whiplash in the aforementioned Femme Fatales. The Femmes (which include Knockout and Mindblast) are working for the Chameleon and they attack Spider-Man at JFK Airport in a fight that leads nowhere. Later, joined by the Scorpion and Tarantula II, the Femmes battle Spidey and the Black Cat. Bloodlust is webbed up and subdued by Spider-Man.

In her most recent appearance, Bloodlust joins the other Femmes on the S.S. Superia as a member of the Femizons. She helps to capture Captain America and Paladin. While the heroes escape and thwart Superia's master plan, Bloodlust and the Femizons remain safe on the island of Femizonia. Presumably she is still there.