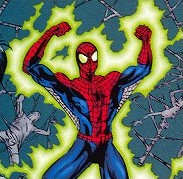 (Avengers#11) - Kang sought a means to defeat his foes, the Avengers. Via a convoluted path of semi-logic, and a little bit of plot-device, he came upon the idea of creating a robot duplicate of Spider-Man. He used his advanced technology to make the robot a perfect replica:

"I must first, create a three-dimensional proto-image of the real Spider-Man! All I need do is feed all photos and facts about him into the Atomo-Duplicator and let the computer do the rest! Ahhh...the almost-living image is beginning to take form now! Next, my Iso-Nuclear Duplicator analyzes every last sub-image...gauging its strength, knowledge, personality, memories and evaluating its every last ability! Then, the final phase begins! Using automated devices which need no human control, the Duplicator soon creates an exact duplicate of the intended subject...possessing every ability of the original...but answerable only to me! To one from the 20th Century, this might seem incomprehensible! But to a master of the science here in the year 3000, it is merely child's play!"
Comment: Would be writers take note: A real villain never ends a sentence with a period! It's exclamation points all the way, baby!

Kang then transported his robot to Earth, at the scene of an impending battle between Captain America and a group of Kang's robots, disguised as normal human criminals. After helping Cap defeat the seeming criminals, Robo-Spidey petitioned him for membership in the Avengers. Cap brought him to the group (Giant-Man, Thor, and the Wasp), but they were reluctant to accept him on the spot. The robot then told them he knew the location of Iron Man (who was at the time MIA, coinciding with the apparent death of Tony Stark in Tales of Suspense#61): Knowing of their encounters with Heinrich Zemo and his Masters of Evil, the robot told them that that group had taken him to the Temple of Tirod. The Avengers left "Spidey" behind as they took off (each of their own methods) to Mexico, but Kang instantly teleported the robot to the Temple to set up traps for them. One by one (or two, in the case of Giant-Man and the Wasp), the Robo-Spidey defeated each of the Avengers--even Thor, by keeping him away from his hammer for 60 seconds. However, unbeknownst to the robot, the real Spider-Man had noticed the appearance of the imposter, and had followed him to Mexico. The real-deal Spidey tangled with the robot, and they were evenly matched until Spidey found the robot's control stud and deactivated it, allowing it to drop to the ground. Kang, having witnessed the defeat of his invincible creation, hung his head as he dejectedly walked down the hall. If there were a can on the ground, he would have kicked it!

(Avengers: The Crossing - BTS) - The temporal energies released during the events of the Crossing reactivated the Spider-Man robot, who began acting on its back-up programming and created a device that could drain the temporal energy from others and use it to wipe out all other timelines/potential futures/whatnot except the age of Kang.

(Spider-Man Team-Up#4) -The Spider-robot caught a young couple, Teddy and Cheryl, who snuck into the Temple of Tirod in its web, adding their temporal energy to its machine. It then did the same to the guards who discovered them. It next traveled to America and stopped a bunch of gang-bangers--draining their energy, too. A group of Avengers--the same four who'd fought it before in Mexico--bumped into the robot in Brooklyn and wound up victims of its temporal web as well.

Ben Reilly had followed the trail of the ersatz Spidey and attacked it the Brooklyn warehouse where it found the Avengers. The robot, however, warped Reilly's perceptions, causing him to suffer from delusions. The robot then escaped, while Reilly stayed on the scene to take the blame--and a beating from the remaining Avengers--Black Widow, Crystal, Hawkeye, Quicksilver, Scarlet Witch, and the Vision--who showed up, wanting to...avenge their teammates.

Meanwhile, Robo-Spidey sought out its master, and locked on to the closest thing it could find on Earth: young Tony Stark/"Iron Boy," who had seemingly been manipulated by Kang and was imbued with remnants of the temporal energy from its trip to an alternate past (you'll have to go read this stuff--it can't be explained so well). The temporal tin-Spidey took Tony to the Temple of Tirod, suited him up in his armor, and twisted his perceptions so that he believed himself to be Kang. It then kicked up the power of its machine, causing a temporal wave to sweep outward from the Temple. The remaining Avengers and Reilly, having worked things out as heroes usually do, headed to the Temple, but most of them were aged into incapacitation by the temporal energies.

Only the Vision, Crystal (with a longer than human lifespan), and Reilly (who was apparently spared b/c the robot believed itself to be the real Spidey, and so refused to accept the existence of any other Spider-Man) were spared. When they arrived at the Temple, their presence allowed "Iron boy" to shake off the robot's influence. The four fought the robot, and the Vision managed to materialize his hand within its head, causing it to explode. The temporal energy released by the destruction of the Spider-robot and its machine somehow reverted things and time to the way they were before it took its first victims. As the headless robot sat, inactive, in the grass somewhere, Teddy and Cheryl entered the Temple just as before, but this time, they only saw a real spider, spinning its web inside.