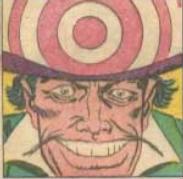 The first Ringmaster, known as the "Ringmaster of Death" is actually Maynard Tibolt's father Fritz. He works for the Nazis until foiled by Captain America and Bucky back in World War II. He and his wife are later murdered by the Nazis for abandoning the cause and his circus is inherited by his son. Initially Maynard tries to run the circus as a legitimate business but cannot make it go. Using hypnotism technology developed by the Red Skull, Maynard becomes a master thief and his circus becomes the Circus of Crime.

In their initial capers, the Circus of Crime travels around the country, hypnotizing its audiences and ransacking entire small towns. But things go wrong when Rick Jones attends one of the performances. At this time Rick has a psychic bond with the Incredible Hulk. When he feels himself succumbing to the Ringmaster's hypnosis, Rick summons the Hulk who eventually defeats the entire circus. The Ringmaster is turned over to the F.B.I.

Presumably, the Ringmaster serves some time and then reunites with his Circus. This time, he decides to base the show in New York City and only rob from the audience. He even manages to hypnotize the Amazing Spider-Man this time around. But, unfortunately, for him, Daredevil is also in the audience. The Man without Fear is blind and therefore immune to the Ringmaster's hypnosis. DD and Spidey team-up to take care of the Ringmaster once again.

Out of prison, the primary members of the Circus of Crime (Princess Python, Cannonball, the Gambonnos and the Clown) decide that the Ringmaster is a has-been. They kick him out of the gang, rough him up, and tell him to get lost. Then they appoint the Clown as their new leader and call themselves the Masters of Menace. The Ringmaster decides to get revenge on his old group by stealing the paintings which the Masters steal from a gallery but he only ends up getting caught fleeing with the stolen goods and he is thrown in the clink once again.

Once everyone's jail sentences are served, the Ringmaster is reinstated as the leader of the group. They learn that the Avengers have been ordered to disband (because of a frame-up job concocted by Power Man I and the Enchantress) so the Circus invites Hawkeye, Quicksilver, and the Scarlet Witch to join them. The three uninformed Avengers think the Circus of Crime is legit and agree to join but as soon as they learn that the whole organization is crooked, they mop the floor up with them and let the police take over.

Freed once again, the Circus is on the lookout for a new strong man when they meet up with Thor, who has been stripped of much of his power by Odin and who is wearing civilian clothes. The Ringmaster hypnotizes Thor, getting him to join the Circus and to help steal a huge golden bull. In a subsequent battle with the police, Thor is captured but the Ringmaster and his group get away.

They pop up again at Avengers Mansion, as they crash the wedding of Yellowjacket and the Wasp. When that doesn't pan out, they go back on the road in a caper involving a substitute Thor, Ulik the Troll and a stolen "secret dual computer" disguised as a barbell. (Really!) Thor puts a stop to that. After laying low for awhile, the Circus adds Blackwing to their group. It doesn't make any difference. They get defeated by Daredevil.

For his next act, the Ringmaster adds Live Wire and some character who calls himself Strong Man to his Circus of Crime and takes on Power Man (Luke Cage) and Black Goliath. (Oh, and the Clown changes his name to Funny Man, believe it or not.) They lose.

It gets worse. The Circus of Crime is reduced to robbing dinner parties only to be defeated by Howard the Duck. To further the indignity, the Ringmaster is punched into unconsciousness by the mallard.

The tired old act continues with the Ringmaster and crew facing off against everyone from Dr. Doom, the Sub-Mariner, and the Shroud to the Thing, Iceman, She-Hulk, Power Pack, and Generation X. But, let's face it, once you've been punched in the snoot by Howard the Duck, who cares about any other details?

At some point in all of this, Ringmaster is given leave from prison in order to use his hypnosis to help Doc Samson reintegrate the personalities of the Hulk. But his only reward is to be nabbed by Nick Fury and tossed back into the clink. More embarrassing escapades follow, including one involving Spider-Man, Devil Dinosaur, and Moon Boy. Eventually, the Ringmaster has had enough. He is last seen making his break from the Clown and the Circus of Crime and walking away from it all.