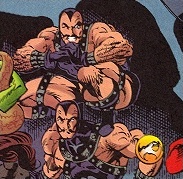 Ernesto and Luigi Gambonno are Italian acrobats and aerialists. It is never said that they are identical twins but they certainly do look exactly alike. (I defy anyone to pick out which is Ernesto and which is Luigi at any given time.) Though they, presumably, joined up with the Ringmaster early on, they did not make an appearance in the Circus of Crime's run-in with the Hulk. And though they think of themselves as the "Kings of the High Trapeze", they are defeated pretty easily by Spider-Man and Daredevil who prove to be superior acrobats to the both of them.

Frustrated by this defeat, the Gambonnos are more than willing to throw in with the Clown, Princess Python, and Cannonball. They kick the Ringmaster out and become the Masters of Menace. Unfortunately, the group robs an art gallery, which takes the Gambonnos away from their trapezes. They are reduced to picking up Cannonball and using him as a battering ram. When Spider-Man attacks the Masters at their hideout, the Gambonnos have a set of gymnastic rings to swing from but they are clobbered by the web-slinger all the same.

Now calling themselves "The Flying Gambonnos", Ernesto and Luigi rejoin the Ringmaster when he tries to lure Hawkeye, Quicksilver and the Scarlet Witch into the group. One Gambonno is defeated by Hawkeye's twirling wire arrow, the other by Hawkeye's hi-intensity sound arrow.

The Circus of Crime returns when the Ringmaster hypnotizes the Mighty Thor into helping to steal the extremely heavy Golden Bull. Not only is the Gambonnos only job in this caper to leap around to try to confuse the police but the rest of the Circus seems to have forgotten their name; calling them the Gambinos. When the plan goes wrong, they manage to escape with the rest of the Circus.

When the Circus attempts to disrupt the wedding of Yellowjacket and the Wasp at Avengers mansion, the Gambonnos are thumped by the Black Panther. When Thor battles Ulik the Troll at the Circus, the Gambonnos are simply grabbed and nabbed by the police. When they next face Daredevil, they have changed their acrobat outfits from blue to green. When they face Luke Cage, they stop talking like they're from Newark and start talking like they're from Italy. (They also get crushed into unconsciousness inside Black Goliath's giant hand.) By the time they meet up with Howard the Duck, their accents are REALLY thick, one seems to think the other is named "Vito", and they get clobbered by Howard's friend Iris Raritan.

And so it goes for them against the Sub-Mariner, the Shroud, the Hulk, Iceman, Johnny Blaze, the Hulk again, the She-Hulk, Power Pack, the Ben Reilly Spider-Man, Howard the Duck (with their new kinky-sex outfits), Generation X, the Peter Parker Spider-Man, Devil Dinosaur, and Moonboy.

In the end, the Gambonnos move to Hollywood, change their acrobat costumes to black, and join the Clown, Cannonball, and Princess Python in a little armed robbery. Whether they are in prison, in the hospital, or still on the loose after being clubbed with a Big Top tent pole by the Hulk has never been made clear.