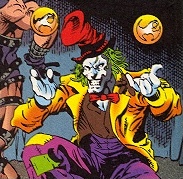 Eliot Franklin is a member of a family that has been involved in professional clowning for generations. He was taught his routines by his father Corky who hoped to turn Eliot into the greatest clown of all, so that he could become the first clown to achieve great wealth. But Eliot drifted from one circus to another without making much money and this made him dissatisfied and bitter. Then he met up with the Ringmaster. He is apparently a member of the Circus of Crime from the outset but he is indistinguishable from the other clowns until he meets in a Hotel room with Cannonball, the Great Gambonnos, and Princess Python when they decide to kick the Ringmaster out and go out on their own. They call themselves the Masters of Menace and elect Eliot as their leader. The Clown comes up with a plan to rob a Madison Avenue Art Gallery but the whole plot is eventually foiled by Spider-Man. Eliot tries to sneak away with the stolen paintings but is clubbed from behind by the Ringmaster who tries to sneak off with the paintings himself.

After they get out of jail, the Masters agree to rejoin the Ringmaster as the Circus of Crime. They try to recruit Hawkeye, Quicksilver, and the Scarlet Witch to the cause but fail. Their next scheme involves the Mighty Thor and a statue of a bull made of gold. This plan also goes wrong but the Clown and the others manage to escape capture in both cases.

So, what's next after botching things twice? Why, you crash the wedding of Yellowjacket and the Wasp at Avenger's Mansion, of course. Eliot is the one in charge of planting the nitro but this plan never seems to materialize. Instead, he is knocked out by the eyebeams of the Vision and the Circus of Crime is again led off to jail.

But they are a plucky sort and keep on trying. The next plan involves Ulik the Troll but it doesn't work either. The Clown does his part by changing his look (from an orange shirt with block polka dots to a blue shirt with black polka dots, from brown pants to red pants, from white fringes of hair to orange fringes of hair) but he just ends up getting tripped up by the cops.

Eliot takes time off from the next Circus of Crime caper. When he returns, he has changed his look once again. His hair is blue, he has replaced his ruff with a polka-dotted bow tie, he wears a red top hat, and he carries a honking horn-cane that shoots out gas. Oh, and he now calls himself "Funny Man". Big deal. He just gets bopped on the top of the head by Luke Cage for his troubles and slinks off to lick his wounds away from the Circus of Crime.

Of course, he's not only back for the next Circus scheme but he's back to his original look and his original name. And what does he get for his troubles? Knocked on his can by Howard the Duck's friend Iris Raritan.

The Circus takes its act to Latveria and Eliot changes to green hair, a red shirt with black polka dots and pants striped blue and white. They run into the Sub-Mariner and the Shroud but manage to turn them over to a Dr. Doom robot who, in gratitude, escorts them out of the country.

After a run-in with the Hulk (he's back to orange hair) and the Thing, Iceman, and Giant-Man (his clown hair is white again), Eliot leaves the group, wipes off the make-up, takes off the polka dots and goes back to being a normal guy. He hangs out with the Quentin Carnival because his father Corky is a clown there. (Johnny Blaze, the Ghost Rider, is a performer there, too.) He wants to go straight but the Circus of Crime (minus the Ringmaster and Princess Python) finds him and won't leave him alone. When Corky's tent burns to the ground (courtesy of the Circus member Fire Breather, now called Fire-Eater), the Ghost Rider steps in to save Eliot's dad. But Corky is badly hurt and the hospital bills will be high so Eliot goes back to the Circus and re-assumes his role as the Crafty Clown. The group even appoints him leader. He takes the group back to rob the Quentin Carnival but his real intention is to way-lay Fire-Eater as revenge for what was done to his father. This ambush is interrupted by the Ghost Rider who forces Eliot to look at his own tainted soul. The Clown sees his life as a hell and is reduced to near-catatonia. Unblinking and robotic, Eliot is given the job of pushing a broom around the Quentin Carnival. Corky recovers, returns to the show, and works hard to help Eliot improve. By the time Johnny Blaze leaves the carnival, Eliot is soft-spoken and stuttering but is able to communicate.

Unfortunately, all of this character development is forgotten. When Eliot recovers (which is never shown), he just goes back to being the Clown with the Circus of Crime, facing off against the Hulk, the She-Hulk, Power Pack, the Ben Reilly Spider-Man, Howard the Duck, Generation X, the Peter Parker Spider-Man, Devil Dinosaur, and Moonboy.

Eventually, he, Princess Python, Cannonball, and the Gambonnos move to Hollywood and resort to armed robbery. That group gig is thwarted by the Hulk. Eliot then goes on to get spiky hair, smoke cigars and become a professional assassin, of all things. He steals the televisions from every one of his victims and stockpiles them in his room at the Hollywood Towne Hotel where he tries to watch every channel possible to see if there is any word on the Ringmaster who has gone straight and against whom Eliot has sworn revenge. He blasts it out with an army of robot repo men who have snatched one of his TVs and then saunters down the Hollywood streets in triumph. He has not been seen since.