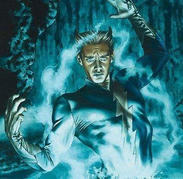 Pietro and Wanda were born in the mountains of Transia, home of the High Evolutionary and placed in the care of the gypsy Django Maximoff after their birth mother passed away several days later. Upon reaching adolescence the twins discovered they were mutants, only to be attacked by the towns' superstitious inhabitants. Fortunately the duo is saved by Magneto and in a debt of gratitude joined his Brotherhood of Evil Mutants, despite their moral obligations. Several months later Magneto was captured by the Stranger - no longer able to coordinate itself, the Brotherhood disbanded with Pietro and Wanda satisfied their debt had been repaid.

Following this the twins enlisted to be among the second generation of Avengers. Iron Man agreed and for some time everything seemed to be going ok for them. However, Magneto, freed from his cosmic entrapment sought out Pietro and easily manipulated him into attacking his team - leading to Wanda being shot during the conflict. Horrified by his actions, Pietro fled (Wanda with him). For a while the pair went solo, until the inter-dimensional warlord Arkon abducted his sister and Pietro was force to seek out the Avengers to rescue her. Despite being reunited with the old team, it wasn't long before Pietros' relationship with Wanda became strained when she announced her love for Vision, disobeying him for the first time in her life, and making the atmosphere tense during his final months as an Avenger. When Wanda was captured by Sentinels, Quicksilver ran ahead of the rest of the team to save her - only to be trapped under falling rubble during the battle, unbeknown to the Avengers. Rescued by the Inhuman Crystal and her pet Lockjaw, he is taken to the hidden city of Attilan to recuperate. During his time there He and Crystal fell in love, but ties with his sister did not heal. Despite an impromptu attack by Ultron and Wanda bringing Vision as her date, the wedding went as planned, and with it Pietro chose to continue aid the Avengers along with Crystal.

The birth of their daughter Luna was the only good thing to happen to the couple for some considerable time. Amidst a series of unfortunate events, Magneto revealed he is the twins' father, Pietro was once again manipulated into once again attacking the Avengers, and he discovered Crystal was having an affair - leading him to viciously attack the man, and all but killing him were it not for Visions' intervention. The two agreed to separate and Quicksilver joined X-Factor. Once again, Pietro found his quick temper alienated him from the group and he attempted to patch things up with Crystal, only to find she had fallen for the Black Knight in his absence. The two were forced to reconcile when Luna was kidnapped by a fraction of the Acolytes in a bid to pit the Avengers against the X-Men. Their plans failed and they were soon defeated, but there was seldom time to rejoice as Onslaught trapped several dozen heroes in a parallel universe (unknown to everyone else, who assumed them dead), Crystal and Wanda among them. Distraught at loosing both beloved sister and wife, Pietro returned to Wundagore and became leader of a band of highly evolved animals. Whilst serving as head of these Knights of Wundagore, he visited with the High Evolutionary and agreed to undertake part in an experiment to enhance his abilities. The Isotope I increased his abilities to nearly double his previous levels - to be informed by a future version of himself posing as his surgeon that his power had nothing to do with speed, but with time displacement.

Months later, the trapped heroes returned to earth, but Pietro and Crystal were unable to reconcile their differences and they agreed to separate once more. Pietro was then appointed by Magneto to be a cabinet minister for his newly formed mutant state Genosha. Disaster struck again in following years when Genosha was ravaged by Sentinels, killing nearly the entire populous, and Pietro returned to the Avengers. During his absence Wanda had become unstable after the inability to conceive and her divorce from Vision finally broke her already fragile mind, and she subconsciously destroyed the Avengers Mansion and killed several of her team mates - along with Vision. For six months she was kept sedated and subdued by the combined efforts of Charles Xavier and Dr Strange, hidden from the world in the ruins of Genosha under the watchful eyes of Magneto and Pietro. However, it was decided by the superhero community that Wanda was too dangerous to be kept alive, yet it too inhumane to be kept in her comatose state. Fearing she would be put to death, Pietro convinced Wanda to change reality to a world where everybody was happy. Thus the world was changed to a mutant majority utopia ruled by Magneto, but when a renegade band of superheroes caught discovered this wasn't reality as it should be a full assault on Magnetos' palace began. Realizing that she would never be able to stop the bloodshed, Wanda returned reality to normal, only this time the mutant gene was removed for 95% of the world's mutants - including Pietro.

Powerless and depressed, Pietro was unable to handle life as a human, and during an argument with Spider-Man threw himself off his building roof. Saved by a worried Crystal, he was again taken for treatment at Attilan. Though able to patch things up with his ex-wife and daughter, he was unable to secure permission from the Inhumans to use the Terrigen Crystals to return his powers. Undeterred, Pietro evaded his escort of guards and exposed himself to a dangerously high dosage of the Terrigen Mists. Upon emerging he found he could not move with super-speed but instead had gained the ability to displace himself in the time stream. Escaping to earth with Luna, Pietro set about using the stolen mists to restore the powers of the people of Genosha. This proved to have devastating results as those he exposed became unable to control their recovered & strengthened powers - resulting in several deaths. Undeterred even by his father's strong disapproval, Pietro set off to Mutant Town, Detroit and set himself up a business restoring powers - leaving Luna behind. The government stepped in and confiscated the stolen crystals, but refusing to return them to the Attilans (resulting in the Silent War several weeks later). Pietro had kept several of the crystal shards hidden by inserting them into his own chest - giving him the additional power to "cure" mutants merely by touch. X-Factor were able to hold off an advancing mob desperate for Pietros help long enough for Rictor (a de-powered mutant working for X-Factor) to overload the crystals with his residual powers and shatter them.

Broken and re-de-powered, Pietro hunted down the person he blamed for the decimation of the House of M and thus all of his current misery: Layla Miller. Capturing and attempting to kill her, he was beaten once again and taken into police custody. Suffering from severe hallucinations, Pietro battled with his guilt and subconscious, before finally realizing that all he wanted all along was to be a hero. Seeing a woman being assaulted on a neighboring roof-top he is unable to sway the police whom think him to be off his face on drugs or drink. In his desperation his powers return and he saves the woman moments before she hits the pavement. Restored and enlightened, Pietro sets off to resume his heroic ways.