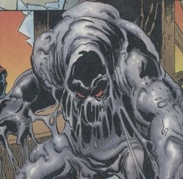 Once David Kalen was an environmental inspector with his brother, Hank. While searching the Sanders Chemical Corporation off site disposal facilities, an illegal toxic waste dumping ground was found. The Sanders Corporation had planned to destroy the site by burying it in an avalanche, caused by exploding barrels.The company also tried to kill the Kalens in the explosion. They succeeded in murdering Hank, but David survived and was mutated by the chemical waste.

He had become a sludge monster with the ability to decompose all sorts of matter. He tracked down and killed the man that had set the explosives, then went after the Sanders Corporation. Kalen went to the New York office of Sanders, and attempted to kill the man but was stopped by Spider-Man (Ben Reilly). D.K. followed Sanders to his chemical plant. Spider-Man again saved Sander's life, and told Kalen to let the police handle him. D.K. allowed Sanders to be arrested and went to Ravencroft Asylum with John Jameson and Edward Whelan. (Spectacular Spider-Man #230)

Months passed and Kalen became depressed, suffering from survivors guilt. He had joined Ravencroft of his own free will to get treatment and thus had the right to leave at any time. He was considering doing so, but was suicidally depressed and was decaying himself from the inside. Ashley Kafka became worried about him and called Spider-Man to talk to him, knowing that Kalen respected the web swinger. Unfortunately, Ben Reilly had been killed in the time that Kalen had been institutionalized and Peter was back as Spider-Man. Peter knew nothing of Kalen. He and Kafka tried to talk him into staying, which upset him and made him attempt to escape. David killed two guards in the failed escape attempt. Spider-Man talked him back to reality, telling him that he understood David's grief, as he had lost a "brother" in Ben. Kalen went back to his cell.

He soon broke out and went looking for Spider-Man. He was dying from his condition and wanted to thank Spidey for trying to help him. Kalen died, forming a puddle of sludge in Central Park. It was at that time that the youthful Adrian Toomes attacked Spider-Man, who flung the Vulture into the puddle. The effects of the toxic waste re-aged Toomes to an old man. (Sensational Spider-Man #18)