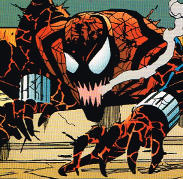 Spider-Carnage is formed in Amazing Spider-Man (Vol. 1) #410, during part 2 of the four-part Web of Carnage story arc.

At this time, Peter Parker has lost his powers and believes himself to be "the clone". The man formerly known as Ben Reilly is now believed to be "the original" and is kicking around as Spider-Man (in a new-look costume with over-the-shoulder stripes).

Meanwhile, the Carnage symbiote has taken over John Jameson (head of security at Ravencroft). When the new Spider-Man fights the symbiote, the alien beastie shifts his affections from John Jameson towards Spider-Man himself, forming... Spider-Carnage!

The new Spider-Carnage is wild and savage. Ben Reilly is now free to seek revenge on all of those who wronged him, starting with Peter Parker! Will the symbiote's rage overcome Ben's self-control? Will Spider-Carnage murder a defenseless, powerless Peter Parker?

No, of course not. By the end of the story, Ben has proved himself a hero, and the red symbiote has returned to Kletus Kasady in his clearly-not-quite-as-secure-as-we-thought cell in Ravencroft.