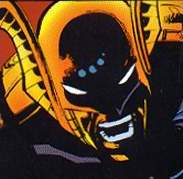 Armada is a mercenary for hire, and he's very good at what he does. His armor changes every time he show up, apparently because of minor upgrades and modifications. He was hired by Mysterio quite a bit to deal with Spider-Ben. Mysterio first sent Armada to steal a Digital Imagery Transmission chip, a device that could make a person's thoughts into a digitally reproduced image. The DIT chip inventors planned to sell it to the entertainment industry, but it was taken by Mysterio for use in controlling television air waves. Beck used the device as a way to control the minds of everyone that was watching television.

Each altercation between Armada and Spider-Man has ended in failure (except the first, when he got away), and Spider-Man is clearly the better fighter.Armada's most interesting quirk seems to be his love towards the small robots that normally surround him. They all have girl's names, and he gets extremely ticked whenever anybody destroys one. (Nooooooo! You killed Maureen!) He's a nut job, but he's a mysterious nut job.

Recently, Armada has apparently ended his pact with Mysterio after the magician tricked him. It is unclear whether he will still work with Mysterio, or if he is now going to try to defeat Spider-Man on his own.