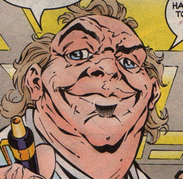 Undoubtedly one of the most despicable individuals to ever cross paths with the wall crawler, Doctor Folsome was crucial to Norman Osborn's revenge against Peter Parker.

Folsome was the M.D. on call when a pregnant Mary Jane was poisoned by Alison Mongrain, a 'poisoning' aimed at inducing MJ's labor prematurely. Folsome, in the employ of Osborn, was the person responsible for delivering Peter and MJ's child. It was Doctor Folsome that informed MJ that baby May did not survive birth, and MJ had no idea that Osborn was operating behind the scenes. Folsome most likely passed the potentially stillborn child into the hands of Alison Mongrain, who then delivered the 'package' over to Norman.

Later, when Peter arrives at the hospital to be by MJ's side as she delivers the baby, Folsome greets him. He informs Peter that there's been a problem, and before Peter can react, Folsome injects him with a drug to knock him out. Folsome then hands Peter off to Norman Osborn who greets his long-time foe after returning from his 'death' back in Amazing Spider-Man #122. Norman sought revenge against Peter for 'killing' Harry, so he used Doctor Folsome to kidnap Peter's first born child.