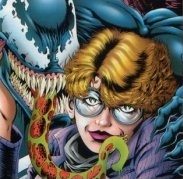 ”The Bride of Venom”

When Anne Weying met Eddie Brock, she thought he was he was intelligent and witty, with a boyish charm. That ended after he was disgraced in the Sin Eater debacle, during which Eddie lost his job. This drove a rift between Eddie and his father, Carl Brock. Eddie tried to gain his father's approval but the latest failure finally created a permanent rift between father and son.

Soon after being fired from the Globe, Eddie was bonded to the alien symbiote and became Venom. Anne filed for divorce and tried to stay out of the public eye, tired of being hounded by reporters wanting to interview "Mrs. Venom." Her peace and quiet was disturbed when she was visited by Spider-Man, who was looking for any information that would help him find his kidnapped "parents." (See: Harry Osborn.) Telling him everything that she knew about her ex- husband made Anne wonder if she had really helped Eddie as much as she could have. She hailed a taxi and went to the ruins of "Thrill World," Eddie's favorite amusement park.

She was stunned to see what her ex-husband had become and tried to convince him that he had a choice in his life. He didn't have to be Venom. Her advice didn't have a chance to sink in, as Brock was attacked by Silver Sable's Wild Pack, who had been hired to bring him in. The typical battle royal broke out, and Anne was nearly crushed by a falling Ferris Wheel. It took the combined strength of Spider-Man and Venom to keep her from being crushed. That incident, plus Anne's outrage at Eddie's stubborn insistence to kill Spider-Man forced Venom to offer a truce to the web slinger. (Amazing Spider-Man (vol. 1) #375)

Meanwhile, a video game company created a game based on Carnage, which enraged Brock and ended badly for Kasady. (Carnage Unleashed #1-#4)

Afterward, the president of the video game company was put on trial for the damage he inadvertently caused, and Anne was his attorney. The trial was interrupted by the attack of a new Sin Eater, who killed the president of the video game company and badly injured Anne. She was sent to the hospital and was protected from the return of the Sin Eater by Venom.

Venom and Anne escape, and go to an old fallout shelter, where the symbiote goes to Anne and heals her. Eddie, helpless without the symbiote, is attacked by bums and nearly killed when She-Venom puts a hurting on them. Eddie is shocked by the violence, which is odd since its nothing that he hadn't done before. (I guess without the symbiote affecting his mind, violence wasn't so appealing.)

Anne kills the bums, and is disgusted by what she did after the symbiote left her. She runs back to her apartment and is taken hostage by the mother of a young woman that Eddie met while looking for Carnage. (The young woman, Kristin, was dating what Venom believed was a a sleazeball druggie named Clive. Venom decided to put a scare into Clive, who fell down a stairwell and was paralyzed. Kristin's mother just happened to be a hit woman, and she went after Anne to draw out Venom as payback for injuring her daughter's boyfriend.

Venom fights Sin Eater, then goes to Anne's apartment, where he is taken down by Kristine's mom. (Huh?) Eddie tells the symbiote to go to Anne, and mom and She-Venom fight. Sin Eater shows up, the symbiote returns to Eddie, Sin Eater gets blown up and mom gets knocked over the head by Anne. (You can see why the 90's Venom comics were not so great.)

”Along Came a Spider…”

Anne was taken into police custody after the events of the first “Planet of the Symbiotes” story. The police knew Eddie would come looking for her and her phone was tapped. She was reluctant to help them, saying Eddie was confused but meant well. The police warned her that she was aiding and abetting a wanted vigilante and she was throwing her law career away. When she finally answered the phone, she called Eddie “Edward,” which she knew he hated. He guessed she wasn’t alone and sent Venom through the phone line to her. The symbiote attempted to bond with her at the police station but Eddie called it back to him. It was as if there had been a three way bonding between them and it was more than he could handle. At least he had learned where she was. Anne actually enjoyed the experience.

Venom rescued her from the police station just as Spider-Man (Ben Reilly) arrived. Ben had heard about a SWAT team surrounding that precinct and knew that Anne was being kept there. After Venom got her to the roof, she refused to go any further. She didn’t want the police to capture him but didn’t want to run off with him either. That’s when Spider-Man arrived and the fight began. (Venom: Along Came a Spider #1)

Anne told Venom that he was hurting Spider-Man and Eddie said that was the idea. Spidey began to turn the fight against him when Anne hit him with a lead pipe. She apologized and said that Eddie had just wanted to help her but then the police arrived and started shooting. Venom protected Anne with his body as bullets splattered into the symbiote. This was Venom’s first time dealing with Ben as Spider-Man and was confused why Spidey seemed so inept against him. Venom did flee after was hit by noise from a siren on top of the police station. Anne was arrested for obstruction of justice and aiding and abetting. She placed her call to Eddie and told him what was happening. She wanted him to promise that he’d stay away from the police station this time. Eddie promised…then sent the symbiote over the phone line again and it bonded to her. (Venom: Along Came a Spider #2)

Anne was confused why Eddie had sent the alien but it told her that he wanted them to meet him at Thrill World. The abandoned amusement park had become a hideout for a gang called LD-50 and She-Venom found them just as they were about to beat up a snitch. She tried to protect the snitch but was stopped by Spider-Man, who thought he was helping her. Instead, he had to save them from her. Eddie arrived during the fight but was attacked by a gangster with a flame thrower. Eddie begged Anne to help him and she screamed at the sight of him. (Venom: Along Came a Spider #3)

The symbiote went back to him and he healed quickly enough that he protected Anne from the gang’s gunfire. Anne was captured by one of the gang members, Roach, who was also the one that roasted Eddie. She was soon rescued by the police while Venom and Spider-Man dealt with LD-50. Afterward, Anne told Eddie that both he and the alien should stay away from her. She never wanted to see either of them again, even to save her life. If he ever ended his vendetta against Spider-Man and fully separated from Venom, then they might talk. Later, Venom decided that he would take their anger out on some criminals but didn’t want to ruin any reconciliation with his ex wife. (Venom: Along Came a Spider #4)

In her last appearance, Anne was in her apartment, too afraid to leave. Ever since the symbiote bonded to her, her life was a nightmare. Her stablity didnt improve when Eddie came back and wanted to have a relationship with her again. She begged him to leave, but instead he threw open the blinds on her windows to brighten her apartment. At that moment, Spidey was swinging by, wearing the black costume. The sight terrified Anne, and Eddie promised to take care of the problem for her. Seeing the symbiote covering her ex-husband drove Anne over the edge and while Venom is battling Spider-Man, she jumped from her window. (Amazing Spider-Man (vol. 2) #19)