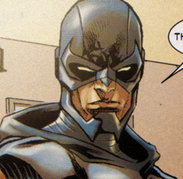 Years ago when Ben Reilly took on a job as a lab assistant for Dr. Damon Ryder, he had no idea of the series of events that would eventually lead to the Raptor nearly killing Peter Parker and his family.

Ben Reilly, clone of Peter Parker and all-round good guy, spent a period of his life in hiding, trying to find a life for himself and establish his own identity in the world. During those 'lost years', Ben traveled a lot but soon found himself in Portland, Oregon after accepting a job as a lab assistant alongside Dr. Damon Ryder. Ryder's research interests involved finding the 'missing link' between dinosaurs and human beings (established scientific dogma would tell you that dinosaurs evolved into birds, but that's another story!).

Ryder took an over-ambitious step and secretly injected himself with recombinant dinosaur DNA, Reilly was the first to uncover this and he confronted Ryder about it. Their confrontation in the laboratory eventually led to a confrontation at Ryder's house, in which Spidey's other clone, Kaine, decided to join. The fight between the three caused Ryder's house to be burnt to the ground. Ryder was convinced that the fire caused the death of his wife and two kids, thus he blamed Reilly for this misfortune. But Ryder was delusional and he had not realized that he himself had already killed his family before the fire broke out. Reilly was able to save Ryder from the fire, but the latter's amnesia left him convinced Ben was responsible for his family's death.

Years past since that dreadful day and Ben Reilly eventually perished at the hands of Norman Osborn, leaving Kaine as Peter's sole living duplicate (that we're aware of!). Ryder, now calling himself Raptor, began tracking the Reilly family in hopes of finding Ben (Ryder was unaware of Ben's death and the fact that Ben was a clone). Peter Parker was confronted by Raptor while he was attending his Aunt May's engagement party in Boston. Raptor nearly killed Peter (believing him to be Ben) and the whole Reilly family, but fortunately Peter was able to fight the villain as Spider-Man and (temporarily) defeat him.

Raptor would soon return though, this time as Damon Ryder, and he confronted Peter at the Front Line's offices. However, Ben Urich quickly contacted the police when the intruder arrived and Peter was spared a gruesome confrontation with the villain. Peter then tracked Ryder down to his Aunt May's house where he discovered the villain holding Harry Osborn and Peter's cousins hostage. Kaine also joined the party, hoping to corner Raptor because he supposedly had the key to curing Kaine's cellular degeneration disease. Spider-Man eventually defeated Raptor, saving Harry and his cousins while leaving Kaine to confront the subdued Raptor. Kaine is informed by Raptor that he lied about being able to help him with the cellular degeneration, this angers Kaine and he strangles Ryder. Ryder's fate is unknown.