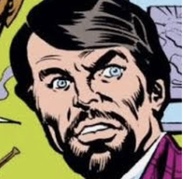 When Harry Osborn first became the Green Goblin, he kidnapped Flash Thompson, Mary Jane and Peter Parker's Aunt May. After Harry was defeated by Spider-Man and taken by the police, the court ordered Harry to get psychiatric treatment. Dr. Bart Hamilton was appointed to be Harry's psychiatrist.

Under hypnosis, Osborn revealed many of the Goblin's secrets to Dr. Hamilton, including the identity of Peter Parker. Kidnapping Osborn, Hamilton assumed the personae of the Goblin and attempted an underworld takeover. Hamilton used much less finesse than Norman Osborn had while he was the Goblin. He tore the underworld apart while looking for the location of that nights meeting of the New York crime bosses. Once he arrived at the meeting place (the top of the World Trade Center), he quickly dispatched the goons that tried to protect their bosses, including Silvio Manfredi, aka Silvermane. Calming the angry gangsters, he told them that he could remove the most persistent pain in their sides...Spider-Man.

Bart left the World Trade Center, promising to return in 24 hours "bearing Spider-Man, or his head on a silver platter!" Peter returned to his apartment after looking for the Goblin all night, just in time for the phone to ring. It was Mary Jane, calling to tell Peter that his aunt had had another heart attack. Spider-Man was on his way to the hospital when he was attacked by Hamilton, whom Spidey easliy defeated with one punch and ran off to the hospital, not even bothering to web up his foe. He believed it was Harry Osborn under the Goblin's mask, and purposely pulled his punch. This mistake cost him, as the Goblin came back and captured him with a ghost net, which expanded around Spider-Man and enveloped him in a plastic polymer.

Spidey managed to escape in a very lucky break: some of Silvermane's goons fired a bazooka at the Goblin, damaging the glider and the plastic net. (Silvermane had gathered the other crime lords to the Twin Towers in order to consolidate them under his control, but the Green Goblin's plans would interfere with his own, so he had to be eliminated.) Spider-Man escaped the bazooka attack, as did the Goblin. The Goblin barely managed to return to his hideout, and Spider-Man was captured by Silvermane's henchmen, whom he quickly defeated once he regained consciousness.

Peter was at the hospital looking after Aunt May (who'd had another heart attack), when he was visited by Robbie Robertson, who came to offer Peter any help if he needed it while May was sick. Robbie was quickly contacted by J. Jonah Jameson, who told him that there was a riot going on at the Radio City Music Hall. He also wanted Peter there to take photos. It proved convenient for Spider-Man, because the Goblin had come to the Music Hall to assassinate Silvermane. In the fight that followed, the Goblin tried to fly away with Silvermane, but he was forced to drop him accidentally by Spider-Man.

Silvermane hit the floor and barely survived, but the Goblin managed to knock Spidey out with the sonic toad (dont ask) and take him to the factory smoke stack where Peter had dumped the body of his clone (Ben Reilly, who would re-appear in the comics nearly twenty years later). Osborn, freeing himself from Hamilton's hideout, suited up in the spare Goblin costume and charged into the fray.

During the struggle between Harry and Bart, Hamilton got the upper hand and activated a bomb in his glove. He threatended that he would detonate "the most potent bomb of them all!" unless Harry appologized for the things he had said during the battle. "I've prepared myself for any eventuality--armed myself against any possible failure!" Hamilton ranted. He apparantly didnt prepare himself for the eventuality of being thrown over the edge of a trash collector by a conveyor belt and killed by his own bomb. Injured, Harry once again lost his knowledge of his Goblin exploits and no longer remembered Spider-Man's identity. Peter took him home, where Harry had a surprise reunion with his future wife, Liz Allan.

Many years later, Hamilton was resurrected by the Jackal (Ben Reilly). Ben had been killed by the Green Goblin but cloned again by Miles Warren but killed many times again. This drove him insane and took his maker’s identity, Knowing Peter’s intense feelings of guilt if he failed to save someone Reilly cloned everyone that Spider-Man had failed to save. Reilly claimed that the villains had been rehabilitated by Ashley Kafka and were no longer a threat. Peter refused to join Reilly, especially after he offered to clone Uncle Ben. Reilly ordered the criminals to kill him.