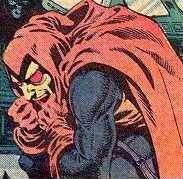 Arnold "Lefty" Donovan was a petty criminal. He thought he found his big break, when the Hobgoblin approached him to enlist him on his payroll. Hobby had taken a beating from Spidey, and he decided he needed what Osborn (The original Green Goblin) had to stand toe-to-toe with Spidey on a fight. While recovering, he thought that normal robbers should attract less attention than the Goblin, and he didn't want to risk meeting Spidey again.

Donovan acted as the middle man, hiring thugs and commanding the assaults on Osborn facilities. During one of these, in a warehouse near the docks, Spidey crashes in and takes down the small army of criminals. In a truck, the mysterious leader throws some bats and a pumpkin, to slow down our web-slinger. The pumpkin starts a fire, and Peter throws a tracer to the truck, and saves the thugs. He then follows the truck, but the mysterious figure had left in a van that was on the back of the truck. The truck was being driven by a robot, who crashed against a light-post when he saw Spidey. The wall-crawler returned to the docks, where he heard the name of the criminal's leader: "Lefty" Donovan. Later, Donovan arrives to a remote Summer house. He reveals to his boss that the whole outcome went as planned: the thugs were caught, Spidey was left back, and the material was found. The boss is revealed: the Hobgoblin, with bandages around his stomach, who says that the stolen goods will give him the strength of the original Green Goblin.

In Amazing Spider-Man #245, Kingsley told Donovan to mix the Goblin-Formula, certainly aware of the complications that could come from there. The formula blew in Donovan's face, leaving him disfigured. Kingsley dragged him to the front yard, and blew up the house. The fireman found an unconscious man, and sent him to the Hospital. 3 weeks later, the John Doe awakens in the Hospital. He escaped and stole a doctor's car to go to the Summer house. The hypnotic suggestion in his mind was taking effect. He went to a secret basement, hidden under the ashes of the burned house, and found the Hobgoblin paraphernalia. He started bombing the city, to attract Spider-Man. In the mean time, Spider-Man had just found that Donovan was being questioned by the Police by the time he was tangling with the Hobgoblin in his first appearance, so he couldn't be the Hobgoblin. When he heard about the Goblin's rampage, he went to him. They fought, Spidey was surprised at the Goblin's strength, as a result of the formula. He knocked him down and removed his mask. Even with the scars, he recognized Donovan's face. It's worth mentioning that up until now, the readers were all clueless about if the guy was the real Hobby or Donovan, cause no mention was made to who got the potion blown up on his face, and Stern wanted to keep us wondering. Becoming lucid with the crash, Donovan realized that he wasn't the Hobgoblin, and told Spidey that his boss said the formula would make him invincible. When Spidey asked the name of his boss, the glider went berserk and crashed against the side of a building, killing "Lefty".

In his hideout, Kingsley observes the news reports. Donovan obeyed the hypnotic suggestions until he crashed, but fortunately for him, he was in control of the situation. Now his computers will duplicate the Goblin formula with safety, and will remove the inherent insanity factor. The whole thing happened just like he wanted it: no witnesses alive, the police thinking him dead, and Spidey with no clues to follow.