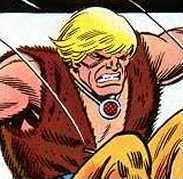 A native of Australia, Frank Oliver was fascinated by kangaroos. He studied them in their natural habitat, eating what they ate, traveling where they traveled. He worked very hard to become like them and eventually decided to cash in on his new skills in the boxing ring. In his first fight, he kicked his opponent, badly injuring him. The referee threatened to press charges on him and Oliver fled to America. He arrived as a stowaway on a ship but was found by the authorities. Oliver was about to be deported but escaped from the authorities. He blamed his power for making him a criminal and decided to embrace it.

His first target was a group of cops carrying a briefcase of what he assumed was money. Upon escaping with it, he found it contained a vial and he guessed it carried jewels. Little did he know it was a container for experimental bacteria. Spider-Man went after him and found him robbing a rooftop party. Spidey saw that he was still carrying the vial and took every precaution to avoid damaging it during the fight. The lid was loosened in the tussle but Spider-Man managed to take it from Oliver before its contents could be released. Kangaroo escaped just as the authorities arrived for the vial, which Spidey handed over. (Amazing Spider-Man #81)

Several months later, Oliver was homeless and discouraged by his defeat by Spider-Man. As he wished that he had a way to be stronger and more powerful, he was approached by Dr. Jonas Harrow. Doctor Harrow offered his help with certain experimental techniques. Those techniques included many surgeries to attach wires and electrodes to Frank Oliver's nerves and brain, which greatly increased his strength and jumping ability. Doctor Harrow was about to explain his plan to Oliver, when the criminal batted him away, telling him that he had his own plans.

Kangaroo went after Spider-Man but the fight didn't last long, as Oliver's mind was quickly screaming in pain. He claimed that there was a voice in his head, telling him to go somewhere. He quickly fled desperate to end the agony. Back at Harrow's lab, the doctor informed Oliver of the mental pacemaker lodged in his skull. If he continued to disobey, the pain would increase. He sent the Kangaroo after a radioactive isotope, which he obtained by smashing through the lab's concrete wall. Spider-Man overheard the news while working on the Spider-Mobile with the Human Torch and went after the leaping bad guy. Spider-Man realized that the isotope was extremely dangerous and warned Oliver against opening the door to the room that contained it but he didn't listen. The gamma radiation burned him to a crisp and Spidey slammed the door shut before he could be effected by the rays. (Amazing Spider-Man #126)

Frank's exploits inspired another criminal, Kangaroo (Hibbs), to follow in his stupid footsteps.

Many years later, Oliver was cloned by the Jackal (Ben Reilly). Reilly had been cloning anyone that had died, which Peter would feel responsible for. Reilly promised Spider-Man that the cloned criminals were no threat, because they had gone through therapy with Ashley Kafka. Reilly offered to clone Ben Parker, which crossed the line for Peter. He refused to work with the Jackal and Reilly ordered the clones to kill him.