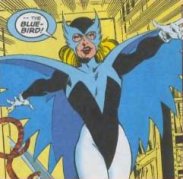 Sally Avril was part of a group of kids in Queens, New York, consisting of Liz Allan, Tiny McKeever, Seymour O'Reilly, Jason Ionello and Peter Parker who were friends since Elementary School. But by the time they arrived at Midtown High School, Peter had drifted apart and the clique was taken over by new student Flash Thompson. From that point, Sally wanted nothing to do with Peter, shooting him down when he asks for a date in favor of "dream boats like Flash Thompson" and coaxing Liz away from Peter rather than offer sympathy after the death of his Uncle Ben.

Always craving excitement and fame, Sally gets her kicks by being an accomplished, blue ribbon winning High School gymnast. Always willing to appreciate a practical joke for the excitement it would bring, Sally is the only member of the group who approves of Jason's prank of stealing Peter Parker's clothes from his gym locker. Convinced that the others disapprove of this theft because it wasn't concocted by Flash, Jason comes up with a new scheme and invites only Sally to join him. The Daily Bugle has previously offered one thousand dollars to anyone who can discover Spider-Man's true identity. Jason and Sally plan to be the ones to win that money.

Prowling the city at night with a pair of binoculars, Sally and Jason come upon a meeting between Spider-Man and Batwing. By this time, most of the enthusiasm for the project rests with Sally. While Jason worries about the safety of the part of town they are in, Sally revels in the excitement. This difference of opinion is only expanded when Spider-Man discovers them and warns them off the hunt; but while webbing Jason's feet to the floor, Spidey merely gives Sally an affectionate pat on the cheek. Still trailing Spider-Man, Sally and Jason witness the wall-crawler committing a robbery unaware that he has inadvertently been brainwashed by Dr. Winkler who is working for Electro. At the villains' hideout, Sally snaps a picture just as Electro prepares to unmask the hypnotized Spider-Man. The flash bulb wakes the web-slinger from his trance but he is still on the verge of being defeated by Electro when Sally staggers the villain with a kick to the head; setting him up for defeat by a punch from Spider-Man. The wall-crawler shows his gratitude by taking a picture of Sally and Jason standing over the unconscious Electro. It appears on the front page of the Bugle with the headline "School Kids Foil Super-Villain".

This success gets Sally thinking that she can take pictures of Spider-Man for the Bugle but when she arrives at the newspaper offices, she finds Peter Parker there and learns that he is already doing what she had planned to do. Peter asks Sally not to tell the other kids.

So, Sally changes her plans and decides to become a super-hero. Enlisting the help of Jason's engineer father for weapons and equipment, Sally dons a white, blue and black costume with a blonde wig and becomes the Bluebird. She shows up at Peter's house and asks him to take action photos of her. When Peter refuses, Sally blackmails him by threatening to reveal his Spidey photography to the rest of the gang which forces Peter to reveal it himself at school. Stymied, Sally decides to become Spider-Man's partner, horning in on his fight with Electro and the Eel. Her new weapon, the Ether Egg, fails when she throws it at Electro because ether evaporates too quickly and even as Spidey defeats the villains, Sally's overenthusiastic coup de grace allows them to escape.

Undeterred by her mistakes and encouraged by her newfound fame when Liz Allan asks for her autograph, Bluebird joins Spider-Man's battle with the Scarlet Beetle, bringing Jason along as her personal photographer. She finds herself in constant danger but is bailed out by Spider-Man who uses one of her Ether Eggs to stop the Scarlet Beetle by throwing it into his mouth. Now realizing that Sally feels invulnerable because she is so sure Spidey will rescue her, the web-spinner decides to do nothing in their fight against the Black Knight's thugs. As a result, Bluebird is quickly punched into helplessness. Spidey lays it on thick, telling Sally she is in over her head and convincing her to quit being Bluebird. But this only boosts her desire to succeed in her previous plan to take action photographs for the Bugle. When Spider-Man takes on the Black Knight, Sally talks Jason into driving her to the scene, urging him to drive recklessly. When she convinces Jason to run a red light, an oncoming bus hits their car. Jason escapes with only a mild concussion but Sally in killed in the wreck.

Spidey blames himself, believing that she would still be alive if he'd let her continue as Bluebird until talked out of it by the Human Torch. "She'll never laugh again", he tells the Torch, "She'll never toss her head the way she did, instantly dismissing whatever she didn't want to think about in favor of something new. She'll never smile, never capture everyone's attention with a few words, never light up a room with her determination and humor. She could be obnoxious, even pushy, but she was vital and alive and fun to be around and now she's gone."