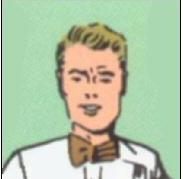 There are bullies. Then, there are the people who want to be bullies, but are too cowardly to actually take any actions. Instead, they encourage the bullies, and feed their fire. Seymour O'Reilly is a bully wanna-be.

We first meet Seymour along with the very first appearance of Peter Parker. In Amazing Fantasy #15, Seymour taunted Peter when he invited a group of the more popular crowd to a science exhibit: "You stick to science, son! We'll take the chicks!" and "See you around, bookworm!"

However, it was revealed in a flashback in Amazing Fantasy #17 that Seymour was childhood friends with Peter Parker, attending his eleventh birthday party along with Charlie, Sally Avril, Tiny McKeever, Jason Ionello, and Liz Allan. They started to drift apart in junior high as Peter showed more interest in scholastics than social gatherings. At Midtown High School, Seymour was drawn to the loud, funny, and energetic Flash Thompson. Since Flash took an instant dislike to the "bookworm" Peter Parker, Seymour followed his lead. Desiring to earn Flash's approval, Seymour (and others) turned against Peter, belittling him at every opportunity.

In another high school flashback in Amazing Spider-Man Annual #17 while a punk named Ernie beat up Parker, it was Seymour who shouted, "Sissy!" Never one to scuff his knuckles, he was a coward and mean-spirited. Fellow student C. J. Vogel showed up and distracted the others with jokes, ending Parker's torment.

In Amazing Spider-Man Vol.I #4, as Spider-Man fought the Sandman at Midtown High, Flash cheered on his hero and Seymour, quick to support Flash, called out, "Give 'im one for us, pal!" Later, Seymour was laughing at Flash's side when Peter backed down from a fight.

Alongside Charlie or Jason in Amazing Spider-Man Vol.I #5, Seymour played a part in a prank on Peter Parker, where Flash was to impersonate Spider-Man and confront Peter who had earlier spoken out against Spider-Man to throw off suspicion. As Peter walked by, Seymour said, "Betcha he'll jump clean out of his skin when he sees 'Spider-Man'! This'll be the greatest gag of the century!" Running to his idol, Seymour called out, "Flash, hurry! Parker's walking by along Front Street!"

As Peter prepared to box Flash in Amazing Spider-Man Vol.I #8 (and teach him a lesson without hurting him), Seymour helped Peter put on his boxing gloves. Seymour smirked as he was sure of the outcome of the match. He quickly ran over to Flash and told him, "Don't end it TOO soon, Flash Boy! Give us a little show, huh?" However, when Peter did finally throw a light punch that knocked Flash out, Flash had been distracted by a cry about the rampaging Living Brain. Seymour cried out, "That was a crummy thing to do, Parker! Poor Flash wasn't even looking!"

Later when the two criminals, who had unwittingly unleashed the Living Brain tried to escape, they tripped over Flash as he was bending over and tying his shoes. Flash's friends rushed in to see the two men lying unconscious, and Seymour asked, "Great work, Flash! How'd you do it?" Seymour was as surprised as the others when Peter showed up and accused Flash of secretly being Spider- Man and having thrown the fight to avoid suspicion.

When Peter was distracted by his Aunt May's illness in Amazing Spider-Man Vol. I #9, Seymour taunted him, "S'matter, teacher's pet? Too busy to answer us common folks?"

Seymour's first name was finally revealed in Amazing Spider-Man #17. Spider- Man is invited to attend a meeting of the Spider-Man Fan Club - Forest Hills Chapter at the Avenue Dinner Club. Seymour is amazed by the turnout, and expresses his worry to Flash that Spidey may not show up. Flash first calls him Charlie, but then says, "Bite your tongue, Seymour! He's GOT to be here!" Why Flash calls him Charlie by mistake is either because he thought Seymour was Charlie, the other Flash flunkie, he was using the name "Charlie" casually like "bub" or "pal," or the Ditko drew Seymour where Charlie was supposed to be. We'll likely never know.

Seymour showed a little more backbone next issue when arguing with Flash why Spidey ran from a fight with the Green Goblin. Seymour had the nerve to call Spider-Man a "professional coward" to Flash's face.

After graduating from Midtown High, Peter Parker did not see Seymour again until Amazing Spider-Man Annual#17 when Peter attended a high school reunion. There, Seymour stuck a "Kick me" sign on someone's back and was punched in return.

Seymour resurfaced again at Peter's second recorded Midtown High reunion a few years after his previous. In Marvel Knights Spider-Man #7, Seymour and a few others (including the unnamed Charlie and Ernie) attempted to give Peter Parker a wedgie while the gym coach took a picture (allegedly to cheer up the ailing Flash Thompson). When Pete hesitated, Seymour was quick to call him a "spoilsport." But when the wedgie attack began, Parker easily held them off. Venom (Angelo Fortunato) burst in, seeking to make a name for himself by killing Spider-Man. Seymour was stunned to learn that "Puny" Parker was Spider-Man. Venom grabbed his head and broke his neck. Peter and Mary Jane testified regarding Seymour O'Reilly's death to the police in the next issue.

Writer of Marvel Knights: Spider-Man Mark Miller came to Spider-Fan, asking for a bully (besides Flash) from Peter's high school days to be killed in an upcoming story. Mike Fichera, Jonathon Couper-Smartt, Henrique Ferreira, Peter Kroon, Al Sjoerdsma, Bradley Bradley, Steve Christensen, and Jeff Christiansen all discussed it and Mike mentioned Seymour, who was always in the background, egging on abuse of Peter Parker. Jeff proclaimed "Death to Seymour!" and we came to the unanimous decision that this cowardly jerk should meet his end...and the rest is history. At first, it was going to be the Ernie or Jason Ionello who was to be killed in MK:SM #7, but Seymour had it coming. Mark Millar gave him the last name O'Reilly in Marvel Knights: Spider-Man #8. Mike suggested the last name "Flannigan." Jeff would have chosen "Butts."