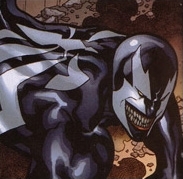 In “The Hunger,” it was revealed that Eddie Brock was dying from cancer. (Spectacular Spider-Man (vol. 2) #4) Brock had made peace with the situation and decided to accept his fate without the help of the symbiote which had served as a life supporting device.

Brock set up an auction in which the winner would gain ownership of the symbiote and the money would be donated to a Catholic charity. After rich mobster Don Fortunato purchased the symbiote for one hundred million dollars, his son Angelo Fortunato took on the role of the new Venom and set out to prove his worth. Eddie asked if Angelo really wanted this and his father insisted that he did. Angelo said he was a loser to the guys and girls ignored him. He wanted to change that. After bonding to the alien, he attacked Peter during his ten year high school reunion, Angelo easily killed several of his old classmates, including Seymour O'Reilly. (Marvel Knights Spider-Man (vol. 1) #7)

During the fight, Angelo briefly thought he had killed Spider-Man, having punched through his body. It turned out that the man he killed was an imposter, who was trying to cash in on a bounty advertised by J. Jonah Jameson. The death infuriated Spider-Man and he went after Venom. Following defeat he fled from Spider-Man and while in mid leap from a rooftop the symbiote abandoned it's new host as punishment for Fortunato's lack of resolve.

During the conflict Spider-Man had run out of web-fluid in one of his web-shooters and was unable to catch Angelo in time. The would-be villain crashed to the ground and was killed instantly. His father watched from the street, proud that his son died a man. The symbiote left Angelo to bond with Mac Gargan, who became Venom III. (Marvel Knights Spider-Man (vol. 1) #8)