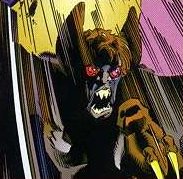 Young Jimmy Santini accompanied his father on a trip to investigate possible illegal waste-dumping in Carlsbad Caverns National Park, where Antonio was either shot in the back by polluters, or fell to his death in a deep cavern (the details in Jimmy's diary were very murky at that point). Jimmy was left alone, lost in the caverns for an unknown amount of time, where to survive he drank polluted water "that tasted like metal". (The chemicals in questioned were dumped by a Dr. Antonio). Eventually, he was rescued, and returned to his mother. However, the chemicals began to take effect, and the boy sprouted wings, at which his mother proclaimed him a demon, and Jimmy ran away, further mutating as he wandered the country, stealing food to survive. Eventually, he came to New York and made his home under an old pier. Jimmy began stealing food from people dining on rooftops, scaring people away with his appearance and cries, to avoid hurting anyone. His appearance caused the press to dub him "Batwing."

Jimmy swooped down upon New York City Councilman Randolph Cherryh and his girlfriend as they dined on the rooftop of Cherryh's high-rise. Terrified, Cherryh told Batwing "Take the girl! Not me! Not me!" But Jimmy just stole a few apples from the table. Humiliated, the councilman decided to put on a high bounty on the "monster." Peter Parker, who was having financial problems at the time, decided to go after the little bat-creature. He arranged a for a large party at the councilman's home, hoping to lure Batwing into the open. It worked, but Spider-Man was horrified when Cherryh's men began shooting at the creature, and he webbed their guns up, and then took off after the fleeing mutant. Batwing scratched him several times with his claws while trying to escape, and when Spider-Man hit him back, he fled, back to his home under the pier.

Spider-Man followed him, and discovered that Batwing was a scared kid, stealing food to survive. He read in Jimmy's diary about his history and offered to help him, but the boy was scared and burst through the pier, right into the hands of Cherryh and his men, who had secretly been following in a helicopter. The Councilman didn't care that Jimmy was just a kid, and was about to kill him when Spider-Man intervened, webbing down his men. Batwing flew off, terrified, despite Spider-Man's offer to get Reed Richards or Henry Pym to help cure him. Cherryh threatened to ruin Spider-Man's life for interfering, but Spider-Man just told him off, webbed his mouth shut, and stuck him in a garbage can. As the police arrived and searched Batwing's lair, Spider-Man voiced hope that when they found the diary, they might be able to get help for the boy.

Spider-Man struck a friendship with Batwing, bringing him a lot of food and companionship even though he still rejects help since he's still afraid of people like Cherryh.

Spider-Man later asked his friend Dr. Curtis Connors to use his expertise to help cure Jimmy. However, an accident in the lab caused Connors' villainous alter-ego The Lizard to emerge, and he battled and defeated Spider-Man before fleeing into the sewers. Spider-Man managed to create an antidote and went into the sewers to cure Dr. Connors. After curing Dr. Connors, he and Batwing left New York on train to go somewhere where they can find a cure in peace.

While attempting to cure Jimmy, Dr. Connors failed and Jimmy reverted to Batwing. He returned to New York and engaged Spider-Man into another battle. Spider-Man was unwilling to hurt Jimmy. With his father dead and his mother rejecting him, Jimmy just wanted to die. Spider-Man tracked down Jimmy's mother and told her that Jimmy is still her son, mutant or not, and that she was wrong to reject her. Just as Batwing was about to be shot by the NYPD, Jimmy's mother intervened, telling her son that she still loved him. Upon hearing this and knowing that he is loved, Jimmy reverted back to his human form and the police backed off. Jimmy went home with his mother, finally receiving the love that he had needed so badly.