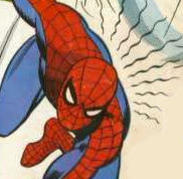 There are some powers which are almost universal among super-heroes – enhanced speed, strength, healing, and so on. By contrast, Spider-Man's "Spider Sense" is close to being unique in the way that it provides an early warning tingle when "danger" approaches.

I can see how Stan would have thought about what powers a radio-active spider might imbue, and been inspired by hard it can be to squash a spider. They do sometimes seem to dodge as if they know in advance that a blow is coming. But as we'll see, that simple ability to sense an incoming attack gets extrapolated to some rather unusual applications in the world of Spider-Man!

Peter has used his Spider-Sense to defuse bombs, find hidden doors, survive fisticuffs with demigods, and to figure out when Mary-Jane is angry with him (although that's not normally so difficult).

Our first point to note is that Peter's "Spider Instinct" doesn't actually appear in his origin story.

In Amazing Fantasy #15 a distracted Peter Parker first discovers his powers when he is nearly run over by a speeding car. His instinctive reaction causes him to leap up onto a wall – thus demonstrating Spider-Leap, Spider-Speed, and his Wall-Crawling all at once.

But there is absolutely no indication here that his Spider-Sense comes into play. The caption clearly states:

Wrapped in his thoughts, Peter doesn't hear the auto which narrowly misses him, until the last instant! And then, unnoticed by the riders, he unthinkingly leaps to safety...

No suggestion of any "early warning" there. Quite the opposite, he only notices at "the last instant". And at no point during the comic do we see those famous "wavy lines" emanating from his head that show his extra-sensory powers in action.

So when do we first see his Spider-Sense in operation? It occurs during Amazing Spider-Man #1 (Story 2) with Spidey visits the Fantastic Four. His "Spider Instinct" detects the unseen danger posed by Invisible Girl and allows him to avoid her invisible rope.

That is of course just the beginning of a series of increasingly nifty uses for his newfound ability.

Two pages later, Chameleon (clearly an inspired scientist as well as an international super-spy) uses the term "Spider Senses" for the first time when he postulates that:

Spider-Man has the powers and instincts of a Spider! I will send him a message that only his Spider Senses will be able to pick up!

And indeed, our hero receives the notification loud and clear, awakening him to the long-range signalling potential of this flexible new ability. But at this point, things start to get a little bit out of control as Spider-Man uses his new ability to "tune in" on the Chameleon's flying helicopter ship as it heads out to sea.

And from then on it's Spider-Sense all the way home as Spidey uses the "tingle" of his Spider-Sense to detect that his "quarry is within striking distance" and then identify that "one of these cops must be a phony." Then again on the final page when the police officers mistakenly attack Spidey, we see the wavy lines of his Spider-Sense when he is falsely attacked.

Check out these panels from Amazing Spider-Man #5 where:

When Peter first created his Spider-Tracer in Amazing Spider-Man (Vol. 1) #11, he used a "small portable receiver" to track the location. He uses the portable receiver exclusively up until including ASM #35.

In ASM #37, Spidey uses a tracer again, this time to track Frederick Foswell to his home. There is no sign of the portable receiver, but nor do we see his Spider-Sense activated.

It's not until Amazing Spider-Man (Vol. 1) #51 that we first clearly see Spider-Man explicitly using his Spider-Sense to track a tracer. He makes no reference in this issue to having abandoned his electronic sensor in favor of his natural sensing abilities. I'm guessing that when John Romita, Sr. took over from Steve Ditko, Romita either didn't know or just plain forgot about the portable receiver, and made a very reasonable assumption that Spidey could use his Spider-Sense.

I do have a vague recollection of a later issue where Spider-Man explicitly clarifies this change when he fires off a Spider-Tracer and says "It's a handy thing I changed the frequency so my Spider-Sense can pick up the signal." But I'll be darned if I can find what issue that happened in.

A later retcon suggested that Spidey uses the electronic detector sometimes because it has greater range than his Spider-Sense.

Here's a few reasons why I see Spidey's sixth sense as deeply intrinsic to the shaping of his character.

NUMBER ONE: Living in a city (and often in shared accommodation), his Spider-Sense is critical to keeping his identity secret. Peter can't move faster than sight like Superman, and he doesn't live in a secure mansion like Batman. He doesn't have access to high-tech identity cloaking. A Spider-Sense is a vital part his superhero life.

NUMBER TWO: The Spider-Sense has been an essential part of so many story-lines. Tracking villains across town, unearthing suspicious activities, identifying spies and phonies – it works endlessly to facilitate plots that otherwise would require a stream of wild coincidences.

NUMBER THREE: Spidey is strong. But he's not as strong or tough as many of the villains he faces. His Spider-Sense allows him to survive spectacular fights with top-rank foes such as The Hulk, Firelord, Wolverine, or a Sentinel robot – all of which would kill or maim-him in three seconds flat otherwise.

This allows a huge range of match-ups that otherwise just wouldn't be feasible. But even better, they don't allow Spider-Man to win these fights. This extends the story, and allows for a rematch, work-around, or clarification to happen afterwords. All of this is done without needing to push Spider-Man up to top-tier in strength or speed, this keeping him more relocatable and avoiding the "Superman" problem of an overpowered arms-race.

So you can see that for the Spider-Man story-writer, his Spider-Sense is an absolute godsend.

Several famous characters are immune to our hero's super-sensing powers.

There's Venom of course, who pushed Peter in front of a train in Web of Spider-Man (Vol. 1) #18. Plus Venom's offspring including Carnage and Toxin. They're all immune because of Spider-Man's extended time wearing the symbiote costume, which learned how that ability worked and how to defeat it. Note that while Peter Parker cannot detect Venom, for some reason Ben Reilly the Scarlet Spider is able to do so.

Speaking of which, Scarlet Spider and Kaine are also undetectable as threats due to their common origins, as is Ezekiel for the same reason.

Then there are some super-powerful characters who are just too good at disguise and dissembling to be detected, such as the Skrull. Note however that the Beyonder was detectable by Spider-Sense.

Then there are foes who have managed to disable his sense using chemicals or other science methods. The Green Goblin was the first to use a gas which soaked into Spidey's costume and suppressed his abilities. Hobgoblin used the same gas.

And oh yes, who can forget this immortal scene from Amazing Spider-Man #114. 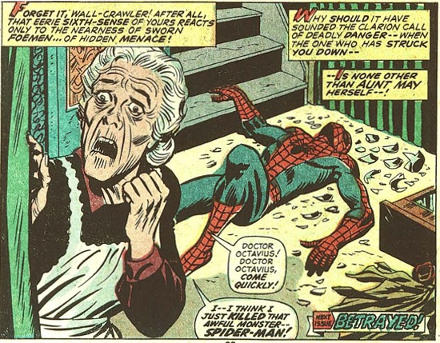 Peter's Spider-Sense can be a double-edged sword. Cosmic events (such as when Thanos destroyed half the population of the galaxy) can be so overwhelming as to incapacitate him. Other villains have deliberately triggered his Spider-Sense in order to trick, mislead, or cause him pain.

Spidey has occasionally lost his Spider-Sense due to other factors, causing him to need to compensate in other ways. e.g. in Amazing Spider-Man #654 he lost his senses as a side-effect of a device used to interfere with Alistaire Smythe's swarming spider-robot army. While his Spider-Sense recovered, he wore an armored costume. The shortly afterwards in the Spider-Island story arc that begins in Amazing Spider-Man (Vol. 1) #667, a similar device again suppresses his Spider-Sense, but this time he compensates with some Kung Fu training courtesy of Shang-Chi.

And of course, his Spider-Sense can only provide a warning. When Spidey is tired or distracted then he may ignore that warning. When he is overwhelmed by multiple threats (or by one super-fast threat) he may simply be physically unable to respond in time, or he may be constrained by insufficient space or leverage.

But despite occasional absences, outages, side-effects, and glitches, our hero's Spider-Sense is right up there at the top of his list of defining and indispensable super-abilities.

Many of the other-universe versions of Spidey have modified versions of a Spider-Sense. For example Kaine's version of the Spider-Sense allows him to see visions of the future, while Spider-Man 2099 has enhanced vision and hearing, including long-range vision, night-vision, and high-speed vision.

Article: This Article
Articles: All Powers