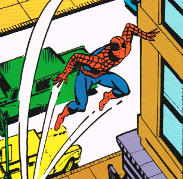 Spidey's ability to leap from a standing position is often overlooked. It was demonstrated right at the start of Spidey's career, in Amazing Fantasy #15. Immediately after his Spider-Sense warned him of an approaching vehicle, Peter leaped up onto the side of a building.

Two issues later in Amazing Spider-Man #2, Spidey performs the impressive feat of Spider-Leaping up through several feet of water to escape from a water tank where he was dunked by the Vulture.

Described in the early Amazing Spider-Man (Vol.1) Annual #1 as "able to leap up to three stories high (in the air)", that figure has since been revised and is more commonly quoted as "50 feet".

One particularly notable leap is the giant "Central Park" leap when Peter returns to earth in Amazing Spider-Man (Vol. 1) #252 after his time away at Secret Wars.

Webbing is very handy. But sometimes a Spider-Leap is just what you need to get you out of (or into) danger!

Article: This Article
Articles: All Powers