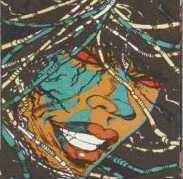 Calypso was introduced in Amazing #209 as a spur for a flagging Kraven. She was painted as a scheming, manipulating woman who got a kick out of seeing Kraven overcome by rage. She reveled in his power. Really, not a well woman.

Following Kraven's death, she was restored to glory by McFarlane in the Torment story in Spider-Man #1-#5. He elevated her from a Witch Woman, to become The Witch. In McFarlane's story, Calypso sacrificed her own younger sister to gain her powers - transforming her own passion for cruelty into a pure lust for evil. She used her voodoo to control the Lizard and torment Spider-Man as revenge for Kraven's death. Never mind that he took his own life. In her eyes, Spider-Man killed her lover. Lizard battered Spider- Man around at Calypso's command, but naturally, Spidey managed to defeat the Lizard despite the throbbing pain in his head caused by Calypso's magic. The church where the fight took place collapsed and appeared to take Calypso's life, but as Spider-Man and the readers knew, she would find a way back.

She was returned to the Land of the Living by Standard Technique Number Seven from the comic writer's book (exhume the body and perform a Voodoo ritual, attempting to use Glory Grant as a sacrifice victim). She soon arrived in Colorado and forced a Guardsman at the Vault (a high tech prison for super criminals) to gain access to the imprisoned Curt Connors. She actually proved quite capable of using her voodoo to get through the heavily armored Guardsmen to get to Connors. Her magic was less successful in controlling the Lizard once she forced the transformation, as Dr. Ashley Kafka had made significant progress with Dr Connors since the last time she and the Lizard had met. The monster quickly overpowered and killed her before escaping.

Recently, she mixed it up with the latest Kravinoff, much to her own regret. Believing Alyosha Kravinoff to be her lover, Sergei Kravinoff, Calypso slept with him. Alyosha laughed at her folly afterward, spurring her to take revenge on him. She attacked him at his father's home assisted by a tribe of Caribbean Indians.

Using their drums and a voodoo dust to control Kraven and Spider-Man (who Alyosha had kidnapped to learn about his deceased father) Calypso forced the two to do battle to the death. Spider-Man was about to deal a death blow to the young Kraven, when Spidey gained control at the last moment and threw a spear at Calypso. It caught her in the arm, breaking her concentration, and the spell.

Kraven and Spider-Man defeated the tribe and Kraven's pet lion nearly killed Calypso before its master held it back. Kraven forced Calypso to let Spider-Man go, much to her annoyance. Alyosha and Calypso then went back to his father's home, where he killed her with no ceremony.