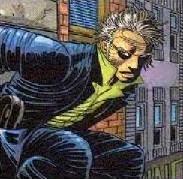 When Ezekiel showed up, he was quite the mystery man. He appeared to Peter, revealing his (Peter's) allegedly true origins, showing the same powers as him, and offering Peter sanctuary, a hideout that could prevent Morlun from finding him. During a conversation, Peter asks him the origin of his (Ezekiel's) powers, and Ezekiel is evasive, but we see a flashback of a young Ezekiel finding the ruins of a lost temple, and being stabbed on a spider altar.

Ezekiel was 57 years old when he first met Peter, and had managed to build a financial empire with his spider-abilities. He decided to do something useful with his life, and wanted to do for Peter what Peter had done for others: help. His board members disagreed with him, afraid that this could lead Morlun to them, in a talk that implied that they had something to hide. They are at least they are fully aware of the situation - Zeke's powers and Morlun's vampiresque nature. When Spider-Man refused sanctuary, he got his butt kicked, and came back asking for help. Ezekiel said that the hideout was now useless, and that he couldn't risk himself by fighting Morlun, because Morlun was unaware of his existence, and he wanted to keep it that way. Later, he changed his mind, and in spite of apparently dying, he managed to buy Peter the chance to beat Morlun. After the battle, Peter headed to Ezekiel's building, to give the news of his death to his partners, but he found the building cleared, and a rubber spider on the window. Down on the street, Ezekiel and his board members were leaving in a limo, with Zeke vowing to keep on helping people.

Zeke returned when Peter was losing the battle with Shathra, the Spider- Wasp. Ezekiel rescued Peter and took him to Africa, to a temple where Peter recovered his strength, and finally defeated his foe. Interestingly, only Peter could enter the temple, not Ezekiel. After the battle, Ezekiel once again went to great lengths to convince Peter that his origins are mystical in nature, and assuring him that there were 3 predators that would come for Peter - Morlun and Shathra would have a successor - before sending Peter back to the States... but when Peter left, Zeke wondered if he'd still find him such a good person if he knew Zeke's true story.

Peter met Ezekiel again when he found out that he was rounding up criminals that had just served their sentence, and was helping them to give a new shot at a honest life.

But their final meeting would be the most brutal. Returning to Peru, to the temple where he first got his powers, he met Miguel, the man who gave them to him. There Ezekiel requested that he bled him once more, to "get it out of his system" to buy him a little time for what he needed to do. Miguel told him that he was doing it for the last time, that Ezekiel would not be the same when he returned next, and that one of them would die, so to prevent it, Miguel would leave.

After that, Zeke went to New York, where he had dinner with Peter and Mary Jane, gave her confidence to try out auditions on Broadway, as a final good deed, and warned Peter that the Gatekeeper, the third and final threat, was coming for him because he didn't get his powers in a purely supernatural way, and he had now been noticed. Zeke tried to make Peter go with him to the Peruvian temple, but Peter refused. The next day, a sea of spiders invaded Manhattan and attacked civilians. Ezekiel once again tried to talk Peter into going to Peru, but Peter decided to stay and rescue the endangered civilians. As a consequence, he met the Gatekeeper head on, and was overpowered and trapped, but instead of killing him, the creature explained to him that he was not the pretender, thus he was not his target. The Gatekeeper showed him the truth.

Back when he was young, Ezekiel strived to find the Peruvian temple. When he did, he saved Miguel's village and the temple from being bulldozed by the Peruvian government, and asked for spider-powers in return. Miguel replied that "to every generation, there is a chosen one. She alone will stand against the demons and forces of darkness. She is the Slayer"... oops, wrong riff. Miguel said that "to this generation there is a chosen one", but Ezekiel wasn't it. Zeke said he could make himself be it, and threatened to allow the village and shrine to be bulldozed, so Miguel tied him up to the altar and bled him, summoning the magic that gave him his powers. The magic sustained him until Peter (the chosen one) gained his powers, and after that, it would come after the rest of Ezekiel's blood. By then, Ezekiel's only hope was to either diverting "the powers" and having them attack the chosen, eliminating his competition, or to convince him to fight on his behalf, and then bring him to the temple and sacrifice him in his stead. Peter then extrapolates that the supernatural threats that he faced were always after Ezekiel, not him, and that Zeke tricked him and them into fighting each other.

My extrapolation - the reason why Ezekiel wanted to be bled by Miguel once in a while was probably to soothe whatever craved for his blood, and maybe that allowed him not to be detected by Morlun too. He wanted to save Spidey from Morlun and Shathra to sacrifice him in his stead later, but I don't believe that those two were after Ezekiel - Morlun wanted a "pure meal", and that was Peter (furthermore, he shrugged Ezekiel aside); Shathra was after Peter for his trip to the Astral Plane after Shade, and that had nothing to do with Zeke.

Anyway, Peter wakes up, and he's in Peru, in the temple, with Ezekiel in front of him, with his forearms and hands turned animalesque. [How Peter woke up in Peru is beyond me. If Zeke had tried to reach for the unconscious Peter, I'm sure that the Gatekeeper would kill him, no?] Apologizing for what's about to transpire, Zeke says that now this is his life or Peter's and that he intends to live. Drugged and confused, Peter was easily KO'd again, despite putting up a desperate fight. Waking up bolted to a column over a spider-shaped marking on the floor, Peter was bled by Ezekiel into the marking. After that, Zeke dropped a bit of his blood into the marking as well, and left.

At the temple's exit, Ezekiel had an epiphany - he realized that the reason why he wanted the powers was to help people, but that in all this time, he had done nothing at all with them. He was killing the person who was exactly what he wanted to be, but never became. Bolting inside the temple, Ezekiel attacked the Temple Spider that was about to kill Peter, and willingly gave his life to save Peter's, finally finding his redemption at the last possible moment.

It was later revealed that Ezekiel had been the leader of the Spider Society for 22 years. When his corporation folded, WebCorps took its place. However, based on Ezekiel's inner reflections of his use of selfish use of his powers, it appears his role was mostly finacially supporting the Spider Society, despite his heart being focused more on his own personal gain. The Spider Society later helped the young super hero, Arana.