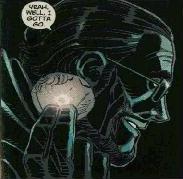 Richard Cranston was a loon who wanted to enter the astral plane via some sort of a ritual. The last thing he needed was a book that a bookshop owner refused to sell, so he shot him. That was 6 years ago. He was arrested and convicted for murder, but not before he read what he needed to know. Some friends outside of jail helped him to figure out worn out words, and sent them in letters with coded sentences, always closely watched by his cellmate.

Finally, one year ago, he was ready. He had made a metal star-shaped icon in the metal shop, and he was going to execute the ritual that would allow him to have free access in and out of the Astral Plane from anywhere and taking anything. He shaped a pentagram on the floor, he cast the spell, the icon burned a star on his neck, and when he was about to be taken to the Astral Plane, his cellmate knocked him on the head and took his place. Richard still managed to deface part of the pentagram, and the cellmate, the man now known as Shade was painfully drawn to the Plane. Richard was driven insane and now resides in a mental institution. As for the Shade, he got the powers Richard wanted. He won the ability to move back and forth from the Astral Plane, and the ability to make his body ethereal while in our dimension, but with an awfully big catch: since he entered the Astral Plane unprepared and the spell of entry was disrupted, the portal of entry was damaged. Therefore, he has to re-establish the balance the spell was supposed to create: in order to leave the Plane for a period of time, he needs to bring someone from this dimension there. So he got in the league with some dealers (perhaps he had connections with them prior to his arrest), and started picking runaways, street kids and drug users, people nobody would miss.

Eventually, one of Peter's students alerted him to the fact that kids were disappearing. His first meeting with the Shade does not go well, as the villain takes another kid, and turns intangible to every blow Spidey tries to land, and landing a few of his own. Spidey manages to get the upper hand for a while after distracting him, but he just turns intangible again, and then touches a star-shaped burn (the same as Cranston's) in his neck and teleports away.

Later, with the help of Doctor Strange and his Hand of Vishanti, Spidey manages to gain access to the Astral Plane, where he follows and faces the Shade, who had just kidnapped Jenny, Peter's student. The Shade's more powerful on the Astral Plane, but still no match for Spidey. Jenny, who hadn't been thrown inside a giant cocoon where all the victims' were entraped, is setting the victims free. After they all flee, Spidey realises that if the cocoon draws energy from the people to sustain Shade's physical form, throwing Shade into the cocoon would cause an interesting loop. He punches Shade there, causing an explosion that apparently destroys him. Then he guides the kidnaped people back to the portal home, bearing no apparent remorse that he was just responsible for someone's death.

While in the astral plane, Spider-Man caught the attention of Shathra.