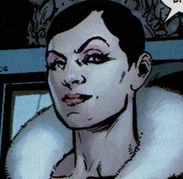 Aleksandra "Sasha" Kravinoff wasn't just a cold blooded psychopath devoted to resurrecting another cold blooded psycho. She was also a gold digger. She met her future husband decades ago at the Roskolov Estate outside of Paris, France. As Sergei was spellbinding an audience of blue bloods with his tales of big game hunting from around the world, Sasha threw a drink in his face, pretending to be disgusted by the tales of slaughter. She then fled from the angry Kraven, only to be tracked down in quick time. Sergei calmly explained to her that the wilderness was far better than anything that civilization had to offer. "We 'whites' should stop grieving over the dusty relics of a long dead past," he told her. "And seize the gift that has been given us."

Sasha spent the night with Sergei, transfixed by this strange man. She left early, reporting back to her father that Sergei was quite attracted to her. He was proud of his daughter, glad that she had managed to attach herself to one of the last wealthy 'white' Russians. Sasha was a backstabber, however, and pushed her wheelchair bound father into an open elevator shaft, telling him "Sorry, Papa. But you are a dusty old relic." She and Sergei were soon married.

As is common with comic book nut jobs, she set a plan in motion to avenge the death of Kraven the Hunter. Never mind that his death was a suicide, it was still Spider-Man's fault. She found notes of her husband's, which explained his use of dark magic to hunt Spider-Man. (I never knew Sergei was a practitioner of magic. Perhaps he learned from Calypso.) She reasoned that the magic could also bring him back to life, and set about gathering the knowledge and resources of doing so. It took years, but the Grim Hunt was ready to begin.

After she and her daughter, Ana Kravinoff, kidnapped Madame Web to keep a watchful eye on Spider-Man, they forced the old psychic into goading his enemies into attacking him. The Gauntlet that Spidey faced consisted of Electro, the Rhino, Sandman, the Lizard, Mysterio a new Vulture and others. As his foes wore Spider-Man down, Ana's servant, Vasili Sidorov, went about regathering the lost Kravinoff heirlooms. Lost after the Russian Revolution, the treasures had become part of various wealthy collections, a sore point for the Kravens. Vasili hired the Black Cat to steal them back, kidnapping her mother as insurance. Felicia gave him fakes and evidence to Sasha that Vasili had an inappropriate attraction to the teenage Ana. Sasha would have killed him, had the Cat not stopped her. Vasili ended up dead anyway, killed by Ana after she returned with her father from the Savage Land.

While Vasili was using the Black Cat, the Kravinoffs were kidnapping various spider themed super heroes, with the intention of sacrificing them to return Vladimir Kravinoff and Sergei from the dead. Mattie Franklin was first, followed by Arana and an attempt on Julia Carpenter, the second Spider-Woman. Mattie was killed to resurrect Vladimir, but as she wasnt a "pure" spider, he was returned in a werelion form. This confirmed Sasha's suspicion that only Spider-Man would be "pure" enough to return Sergei properly. (This business about "purity" goes back to the Totem Saga. See Morlun for more details.)

After Spider-Man (actually it was Kaine in disguise) was sacrificed, she welcomed Sergei back telling him that the world had grown fat and weak without men like him. They needed him to thin the herd and show humanity its true nature. Sergei wasnt interested. In fact, he was enraged. The ceremony had given him the curse of "unlife" and he could only die by Spider-Man's hand. He lashed out at Ana in rage, and the girl instinctively protected herself, stabbing her father. Sasha promised her that she would die for it. There was no time, as a very angry Spider-Man arrived, looking for blood to repay the Kravinoffs for the deaths and torture of his friends.

Sasha was out of the fight after Spider-Man left a "Mark of Kaine" on her face, in "regards from my brother." The Kravens realized they were outmatched by Spider-Man and the surviving Spider-Women and they fled to the Savage Land. Sasha didnt last long after that. After expressing disappointment in her husband, Sergei snapped her neck.