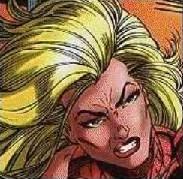 Stunner is Angelina Brancale, a lonely obese woman who worked as a secretary for Dr. Carolyn Trainer, the second Dr. Octopus. When Dr. Trainer is approached by Otto Octavius with a plan to use her virtual reality equipment to create a new body for him, the duo decide to test the machines on a human guinea pig first. Angelina is chosen. She is strapped into an elaborate, confining VR machine and is given a new and virtual body... Stunner. She is so grateful to Otto Octavius for her strong and beautiful form that she falls in love with him.

The story of Stunner (and the new Doctor Octopus) is inextricably bound with the complex, sometimes convoluted, Clone Saga. She first appeared in spiderman_amazing.397, walking into a bar and declaring herself to the patrons as "every woman you've ever dreamed about and drooled over". She is tall, muscular, blonde, blue-eyed, with a slim waist and large breasts as only seen in comic books. She is also strong enough to tear the bar to pieces. And, she is intimately involved with Dr. Octopus. In a quiet moment of reflection with her lover, Stunner suddenly vanishes; our first indication that she is not all that she seems.

At this same time, Spider-Man was dying. He had been infected by the Vulture with a virus that has no known cure. In their first fight, Stunner defeats him easily. Dr. Octopus soon joins her and unmasks the helpless wall-crawler.

Strangely, Octopus is not only unsurprised that Peter Parker is Spider-Man, he also works feverishly to try to find a cure for the virus. Even after Peter goes into cardiac arrest, Octopus manages to save his life. The virus is conquered and Stunner is sent to get the police. The plan is for Octopus to be arrested and freed by Stunner. Then the long dance between spider and octopus can begin again. Unfortunately, the plan is upset by Kaine, the first clone of Peter Parker, who knocks Stunner unconscious with a gas bomb, then proceeds to murder Doctor Octopus by snapping his neck.

Things get complicated. Lots of Peter Parkers start running around. (Including Ben Reilly aka the Scarlet Spider and the clone who eventually becomes the evil Spidercide.) Kaine has murdered people from Utah to New York, leaving his fingerprints, to implicate Ben (who Kaine believes is the real Peter Parker). Kaine, bitter over his existence as an imperfect clone means to torment the original. He thinks his plan backfires (except that after all was finally settled, Peter was shown to be the original) when Peter is arrested instead. (Later, things get really complicated when Ben switches places with Peter in prison.) Detective Jacob Raven, from Salt Lake City, has worked to arrest Peter but now that that has happened, he has doubts. Stunner meets up with him and suggests they work together to defeat the man they both want: Kaine.

Eventually, Stunner meets up with Kaine while he is fighting Spider-Man. She joins the battle but only succeeds in knocking a building down around herself. Spidey finds her pinned in the rubble but, before he can help, Stunner vanishes.

The truth about Stunner starts to come out in the Scarlet Spider titles. At this point in the saga, Dr. Seward Trainer (Ben Reilly's friend) has performed tests that show that Ben, rather than Peter is the original Parker. Peter and Mary Jane move to Oregon and the Scarlet Spider takes over the books. After two months, Ben assumes the role of Spider-Man.

In these books, the Scarlet Spider finds himself in the midst of a gang war as two groups vie for stealing virtual reality components. One group is led by Alistair Smythe, the other by Carolyn Trainer-the second Doctor Octopus. Doc Ock II brings Stunner into the fray by conjuring her up in cyberspace. Ock's partner, the Master Programmer (a template of the original Doc Ock's mind imprinted into a computer), gains Stunner's trust. Shortly after that, Angelina is introduced for the first time as it is revealed that Stunner is a solid virtual reality construct. The real Angelina is completely wired into and trapped in a huge VR machine.

Unfortunately, in the wake of the war between Doc Ock II and Alastair Smythe as well as the rampage of the VR-created Scarlet Spider, Stunner is lost in the shuffle. She does not appear again until Peter Parker has re-assumed the Spider-Man role. The occasion is the resurrection of her lover, the first Doctor Octopus.

Otto Octavius' body is stolen by the Rose, Delilah, and the Hand with an eye towards bringing him back to life. Doc Ock II learns of this and recruits Angelina from her job at the video store (and how she got there from where we left her is a mystery, my friends) to assume her Stunner persona. They end up joining forces with the would-be reanimators. A physical essence is needed to revive Octavius and Spider-Man is captured for that purpose. But when the web-slinger escapes at a critical juncture, Stunner volunteers herself. Because Stunner is a VR construct rather than a real physical being, the results are explosive. Octavius is resurrected but the reanimators are killed in the backlash. The Stunner body dissolves and Angelina falls into a coma from which she has not yet awakened.

Years later, Angelina awoke in the hospital from her coma. Her body had atrophied during her coma and she found physical therapy help from Sha Shan. After Angie was strong enough to walk again, she immediately returned to the hologram machine and became Stunner again. Little did she know, but the Spider-Man that she knew as her enemy had been replaced by the Superior Spider-Man. (Superior Spider-Man #20)

Knowing that Spider-Man usually showed up at the Bugle, that was the first place she headed to. She found Robbie Robertson and Betty Brant, who told him that Spider-Man was watching the city with his spider bots and showed up when they detected a crime. She made good with that information, smashing up the street. Otto was amazed to see her again after so many years, but webbed her up for the police. He left to attend to Professor Donald Lamaze but Stunner followed after dissolving the webbing. She through a bus full of people at her enemy/lover, missing him but nearly killing Lamaze and Anna Maria Marconi, his new love interest. The dense light illusion of Stunner was destroyed after the spider bots arrived at her hideout to disable the equipment. Otto arrived later, using the hologram technology to appear as Doctor Octopus. He told her that he was indeed alive but that he had moved on from her. She stayed a prisoner at Spider-Island 2. (Superior Spider-Man #21)