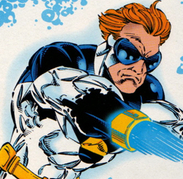 A once meek scientist, Dr. David Patrick Lowell was transformed into the criminal Sundown after being exposed to a chemical structurally similar to that of Green Goblin formula.

Lowell was a research scientist working at Osborn Chemical where he studied plant physiology in an attempt to alter plant growth via solar absorption. The project was entitled Photogenesis and it was producing incredible results. However, when Lowell was overlooked for a promotion (in fact the promotion was given to the infamous Dr. Winkler) he immediately confronted Norman Osborn with his results. When Norman saw the compounds Lowell was making he immediately recognized their similarities to Stromm’s Goblin Formula. Osborn terminated the photogenesis project and ordered Donald Menken to destroy all of Lowell’s work (notes/chemicals/etc). Lowell became infuriated and he desperately fought to save some of the chemicals from being dumped down the drain. During the struggle Lowell accidentally spilled some of the chemicals on himself (he swallowed some too) and he fell back on to a pile of solar lamps. The combination of the lamp energy and the Photogenesis chemicals transformed Lowell into Sundown, who now had the ability to absorb solar energy and use it to fly, grow in size and release energy projections.

Soon after the accident Lowell donned his Osborn Chemical coverall and began wreaking havoc across NYC as Sundown. Spidey was the first on the scene but the Avengers, X-Men, Fantastic Four, Dr. Strange and Daredevil all chipped in to try and stop this new threat. But Sundown held his own against the heroes and it was not until Lowell nearly killed a young girl with one of his energy blasts that he actually surrendered. The girl was a young neighbor of his named Mary Kelleher, and after he had realized what he had done he broke down into tears and handed himself over to authorities. Lowell was sentenced to 10 years in prison.

While behind bars Lowell was approached by the gangster Lucky Lobo, who was impressed with Lowell’s skillset and even more impressed by his decision to not use those skills to escape. Lowell told Lobo that he felt had to serve out his sentence as the penance for nearly killing Mary Kelleher. After Lobo is released from prison he continues to keep tabs on Lowell in the hopes of recruiting him into Lobo’s gang.

After serving 10 years in jail, Lowell is released and the first person to greet him is Donald Menken. Menken offers him aid in getting back on his feet, but Lowell refuses recalling Menken’s role in the destruction of his research. Lowell attempts to get a regular job but he is soon approached by Lucky Lobo who threatens to harm Mary Kelleher if he doesn’t join Lobo’s team. Lobo appears to have Lowell cornered, but with the help of Spider-Man they double cross the gangster and land him back in jail. Sundown then shares one last amicable conversation with Spider-Man before disappearing into oblivion. Neither Sundown nor Lowell have been seen since.