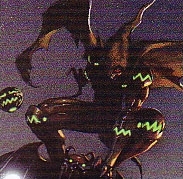 During recent times Nick Fury director of S.H.E.I.L.D. uncovered a plot in which a large team of obscure technology based super villains operating in the US were being secretly organized by a supposed ally of America. These criminals new tech armor was being provided by the Tinkerer, and funding came from the new Prime Minister of Latveria- Lucia von Bardas. After informing the President of the situation Fury was told it was nothing to worry about and to go back about his business. Fury however, realized these lower rank villains wouldn't be able to afford the hardware they were sporting and that it could be leading toward something nasty. Without government approval he assembled Captain America, Luke Cage, Daredevil, Wolverine, Spider-man and the Black Widow- Special field officer of S.H.E.I.L.D., to make a covert trip to Latveria and overthrow those in power, and so began a new 'Secret War'.

During this mission Fury led the hero's to Lucia von Bardes were after battling and defeating the tech criminals that were protecting her, Black Widow used her seismic powers to level the castle they were in and turned the whole of Latveria to ruins. Following this mission those involved had their memories of these events wiped.

One year later the hero's who had unknowingly to them, been part of a illegal S.H.E.I.L.D. operation twelve months previous found themselves involved in an ambush on home ground. The full 18 tech criminals attacked Fury, Captain America, Daredevil and Spider-man in unison on the docks of NYC. Here Spider-man tackled the latest in the line of Villain's adopting the Hobgoblin persona. Like the rest of his team the Hobgoblin's suit was a metal body armour, much more resilient to attack than the suits of those who had previously adopted the Hobgoblin mantle. Although interestingly, the technology employed in his weapons/Glider were identical in performance to his predecessors.

As the battle raged on it looked as though things were getting desperate before the Fantastic Four showed and helped the others finish up. When the smoke cleared Lucia von Bardas appeared, now herself some half cyborg hybrid. Damning Fury she announced she would destroy NYC as the hero's had Latveria one year ago. The 18 tech suits had been designed so that when activated together they would create a anti-matter chain reaction bomb. Lucia detonated the bomb but before it could reach the apex of the explosion, Black Widow operating on direct orders from Fury sent a seismic wave to the power source in Lucia's chest and shut down the blast.

Although the chain reaction had not reached fruition it had done sufficient damage. The pier had been turned to rubble and most of the tech villains including the latest Hobgoblin were knocked unconscious, their suits destroyed.