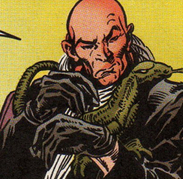 Doctor Angst, aka Dr. Jonas Meuller, is a scientist whose professional research involved studying the nature of human suffering and anxiety. His efforts in this area had made him into an outcast within the scientific community. However, his research did catch the eye of Norman Osborn, who befriended Angst during his exile in Europe. Osborn began funding Angst's research in the U.S. and assigned Angst a special task aimed at dissecting Spider-Man's pysche. Osborn did not want Spider-Man dead or broken, rather, he wanted Angst to test the limits of Spider-Man's endurance, both physical and mental.

In order to trap Spider-Man, Doctor Angst required the services of an old friend and 'patient' of his named Sir. Sir is actually a woman named Martha Patterson who was given massive hormonal injections and muscle grafts by Angst transforming her into a domineering man! Angst had Sir released from Ravencroft Institute, where she was being held, and he sent her to attack Norman Osborn. In an attempt to bait Spider-Man, Sir confronted Osborn at the Daily Bugle, causing Spidey to come out of the woodwork. After trading blows, Sir eventually succeeds at capturing Spidey and the web-slinger was subjected to Angst's experiments. Spider-Man was forced to revisit some of his most painful memories including the deaths of Gwen Stacy, Uncle Ben, and Aunt May. Spider-Man finally broke free of Angst's restraints when forced to relive the day a young Peter Parker found out his mother and father had died. After destroying Angst's equipment, Spider-Man left the laboratory without harming the vulnerable Meuller. Sir, who witnessed the torture administered to Spidey, was inspired by the wall crawler's resiliency and she escaped Angst's labs as well.

Angst remained in the employ of Norman Osborn and aided him in the development of the Green Goblin decoy (aka Green Goblin V). Osborn was on a campaign to dissuade the public from the 'accusation' that he was formerly the Green Goblin, so he wanted to use the decoy to debunk any suspicion that he and the Green Goblin were one in the same. This was critical during the Spider-Hunt saga in which Osborn placed a bounty on Spidey's head after Spidey pummeled him in his offices (which was secretly videotaped by Osborn). Angst and Osborn staged a fake-kidnapping of Normie Osborn to garner even more emotional support for Norman from the public. The Green Goblin decoy demanded a $10 million ransom for Normie's safe return and Norman was instructed to bring the money to the 'exchange' at the Brooklyn Bridge. In the ensuing melee, the Goblin decoy seemingly dies, however, he's later seen being debriefed by Doctor Angst back at the lab. Norman then walks off with the decoy and Angst is never seen again.

It's quite possible that Osborn cut ties with Angst after his role in preparing the Green Goblin decoy and the subsequent kidnapping. The Green Goblin decoy pops up again during the Goblin's at the Gate arc and Norman is solely responsible for directing the decoy. Also, the Goblin decoy appears to be operating independently of Osborn and Angst when his identity is revealed to be a genetic construct back in Peter Parker Spider-Man Vol. 2 #18. Both of these occurrences suggest that Angst was out of the picture.

Angst's current whereabouts and affiliation with Osborn are unknown at the present.