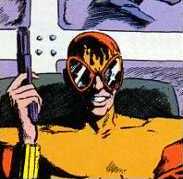 The "Blaze" identity was created by three bored Empire State University students (Barry, Ashley and Thomas) that believed that they were smarter than the average super hero. Ashley, a supremely arrogant young man that smoked a pipe, claimed that he could run any costumed super hero ragged within a week. A bat nearly flew into the window as Ash considered super heroes to be "a cowardly and superstitious lot." He nearly said who he was thinking of, when Thom stopped him from finishing. Ash quickly changed his mind to Spider-Man.

They spent the next few days studying Spider-Man and his link to the Daily Bugle. They also observed him personally as he went about his nightly patrols. They found a pattern in the routes he took as he swung over the city and planned to leave objects to catch his attention in the following nights. They also came up with a fictional terrorist and mercenary they named Blaze. The trio first caught Spider-Man's attention by sending a note to the Daily Bugle, telling him "Your time is near!" The envelope was opened by Robbie Robertson, with JJJ and Peter nearby. The letter burst into flames after it was read, which Peter recognized as a harmless chemical fire.

"Blaze" soon struck again, leaving a flaming message to Spider-Man on a tenement building wall as the mayor was announcing plans to tear them down. As Ashley and Barry congratulated themselves on another success, Thomas got cold feet and left the group. The two decided to make a Blaze costume (which Ash wore) and a video claiming to know Spider-Man's identity. Later, they made an effigy of Spider-Man, half of which was Peter Parker. They drew Spidey's attention with fireworks and the effigy burst into flame, but just enough to destroy it without hurting the hero. They chose to make the effigy half-Peter simply because he seemed to have the closest ties to Spider-Man. It was their way of telling the wall crawler, "you're next."

Ashley and Barry were stunned when they were confronted by Blaze himself, who claimed to be grateful that they created him. Barry got spooked and wanted to tell someone what had been going on, when Ash stopped him. Soon, Blaze left a message to Spider-Man in the form of a giant flaming "B" in the sky. Spidey followed the sign to it's source and found the criminal. The villain got away, but left behind a note for Spidey to meet him at 10:00 at "the Arch." Ashley and Barry also found a note at their apartment, telling them to meet the sender at Washington Square Park at 10:00. They all arrived at the Washington Square Arch and even Thomas showed up, after having gotten a note of his own.

Blaze immediately appeared and began battling Spider-Man, showing a great amount of control over his fire powers. Blaze seemed to have Spidey beaten, when Thomas jumped between Spider-Man and the villain, ending up with severe burns covering his body. Blaze fled, and Ahsley and Barry were heartbroken to see their friend suffer. Spidey told them that if they were connected to this, to meet him at the medical center. There, they confessed to everything with Captain Jean DeWolfe and Spider-Man listening. Captain DeWolfe told them to leave and she would discuss formal charges with them later. After they left, Thom got out of bed and pulled the "burns" off of himself, as they were nothing but makeup. The Human Torch showed up, revealing himself to be the man behind the Blaze mask.

Thom told Captain DeWolfe that he had known Peter as a grad student and felt bad for the way he was being stressed because of their prank. After he abandoned Ash and Barry, he told Peter what was happening. He wanted Peter to contact Spider-Man and Peter directed him to the Torch. "Coincidentally," Spider-Man showed up when Thomas was talking with the Torch and they agreed to repay the prank with a prank of their own. The Torch agreed to impersonate "Blaze" and Thom agreed to wear a fire proof Fantastic Four costume to protect himself from the fire. The fight in Washington Square was all an act to scare Ashley and Barry. Captain DeWolfe wasnt happy to be part of an elaborate prank and told them all to never bother her like this again. Barry and Ash left, certain that they would be dismissed as mere college pranksters. (Peter Parker, The Spectacular Spider-Man #103)

The final Blaze was Kirk Donoghue, who bought the identity from the Foreigner. He received the costume and paraphernalia of the first Blaze courtesy of a middle man of the Foreigner, who called himself "J.D." Kirk tried to kill J.D. after taking the equipment, but failed as the clip board he had was fire proof. Donoghue was paid $10,000 to engage Spider-Man and the Black Cat and was promised an extra $20,000 if he beat them. At the same time, Donoghue had left a threatening message at Felicia's apartment, warning her that since she was Spider-Man's girlfriend, she would be the first to die.

Black Cat and Spidey met with the Foreigner at Felicia's insistence, thinking that he might know who was behind the threat. (She knew him as an importer/exporter who knew shady people, but didn't believe him to be shady himself.) Foreigner told them that Donoghue had been at his place of business looking to buy the Blaze equipment but he sent him away, because he was a honest businessman. He had, however, kept Donoghue's phone number and called him to place a meeting. Naturally, Spider-Man and Black Cat showed up instead.

The two vigilantes showed up at the address and found Blaze, who had a TV screen showing a kidnapped woman being tortured. Blaze told them that he knew he could never beat them, so he made them an offer: he would leave them alone if they paid him $30,000 and he'd let the woman go. Spidey threw Blaze threw a door, knocking him out. Spider-Man and Black Cat went their separate ways to find the hostage, encountering Blaze's goons as they searched the building. Spidey eventually found the woman, who was already dead. The image that they had seen on the TV had been a recording.

Spidey and Cat went back to Blaze who had recovered and was joined by his goons. Spidey tore through them and easily defeated Blaze. He was about to knock a few teeth out of the killer's head when he was stopped by Lieutenant Keating and the fire department. Spidey left when Keating demanded that he give up Donoghue. At the police station, Keating met with Blaze and killed him, breaking his neck. He then tore a barred window out of the wall. When other officers arrived, Keating blamed Spider-Man for the death of Blaze. (Peter Parker, The Spectacular Spider-Man #123)

Years later a new Blaze showed up, working for Roderick Kingsley. Kingsley had stolen the costume and equipment and sold it to this new, unnamed thug. In return, Kingsley got a percentage of their profits. Kingsley was not impressed by this new criminal, who mistakenly gave his cut to the Green Goblin. Roderick demanded that they make up for the loss and soon Bruin, Devil-Spider and Blaze were undertaking a robbery in the diamond district. They were stopped by the Superior Spider-Man, who was bonded to the Venom symbiote. (Superior Spider-Man #24)

Blaze was easily disarmed by Spider-Man and nearly killed, until the symbiote powered vigilante was stopped by the Avengers. The distraction gave Blaze the opportunity to escape. (Superior Spider-Man #25)