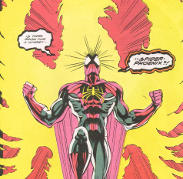 In Spider-Man (1990) #25, Spider-Man is travelling in England when he encounters Captain Britain and Excalibur, before they all tumble into battle against Nightmare and D'Spayre.

Before he knows what has happened, Rachel Summers (aka Phoenix) is dead, and Spidey has acquired her powers, which he uses to battle a host of other foes as they attack.

Eventually we learn that the whole thing was faked by Arcade – a complex series of tricks involving robots and VR goggles. Spider-Man never really possessed the Phoenix Force, it was simulated by a "bio-organic circuit board" webbed to Spidey's back.

Still, I think we can say that a "transformation" still happened. Unless the bio-organic circuit board wasn't real either, it was just a part of the VR projection? The whole story is such a mess, it's hard to tell!