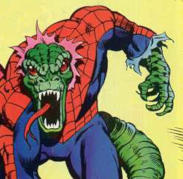 The story of the Spider-Lizard has its first origins back in Amazing Spider-Man (Vol. 1) #164 when Dr. Curt Connors creates an "Enervator" device to keep Spider-Man alive after Kingpin stole the web-slinger's life force using a "Vita-Drain" machine.

Subsequently in Spectacular Spider-Man (Vol. 1) #32, Dr. Connors experiments further with the Enervator and accidentally creates the monster known as Iguana. Connors uses the Enervator on himself in order to become the Lizard and defeat Iguana. That doesn't turn out exactly as planned, and Spider-Man has to come to the rescue.

In Spectacular Spider-Man (Vol. 1) #34, despite knowing that exposure to the Enervator causes mood shifts and transformations, Peter Parker uses his scientist skills to create a portable version of the Enervator. He carries this around on his back until he can track down Lizard and Iguana and save the day.

All of this comes back into relevance in Spectacular Spider-Man (Vol. 1) #39. Dr. Connors (via a newspaper advertisement) persuades Spider-Man to swing by his laboratory for a check-up. It is clear that Spider-Man's mood is still being negatively affected by his earlier exposures to the Enervator.

When (in that same issue) Spider-Man faces the Scourge of the Schizoid Man, the mental stresses are too much for his enervated system to handle, and a terrible transformation is triggered. Spider-Man becomes... Spider-Lizard.

As is traditional in these two-part "hero transformation" arcs, the transformation of man into monster occurs at the end of issue #39 with a dramatic final panel. Then in Spectacular Spider-Man (Vol. 1) #40, the papers blast the headline "SPIDER LIZARD TERRORIZES MANHATTAN" as the police launch a manhunt, or at least a lizard-hunt.

In the end it is Dr. Curtis Connors who finds the Spider-Lizard in the sewers. The Spider-Lizard smashes the bottle of serum that Connors intended to use to effect his recovery, but (as is traditional) some last vestige of mercy or humanity prevents the creature from killing Connors.

Fortunately, Connors has a back-up bottle of serum, which he manages to drop into the creature's mouth. This (after an appropriate dramatic "it's not working!" pause) triggers Spider-Man's rapid recovery.

Of course, the whole story is a role-reversal of the classic Parker/Connors/Lizard template, but with Peter as the monster who is rescued by Curt instead of the other way around.