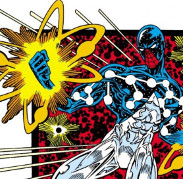 In that issue, Spider-Man gains basically "all of the powers", but with no explanation.

In the following issues of that arc, Spider-Man discovers new abilities, while increasingly struggling to keep his enhanced powers under control. All this while undergoing attacks by unexpected new foes courtesy of the "Acts of Vengeance" crossover event.

In Amazing Spider-Man (Vol. 1) #329, all is revealed. The "cosmic powers" are actually the powers of Captain Universe, granted by the mysterious Enigma Force.

Go read the issue review for the full story. But the quick version is: "A glitch in the power transfer caused Peter to receive the powers but not the awareness that usually goes with them. He was granted the powers so that he stop the Tri-Sentinel from causing a nuclear explosion that would destroy New York City.

Spidey gains full awareness, along with the costume change. The Tri-Sentinel is defeated, the Captain Universe depart and move on to their next appointment with destiny. Spider-Man is back to "Spider-normal" – and very, very tired.