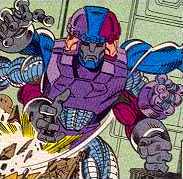 The saga Acts of Vengeance was originated by Loki getting together a group of criminal masterminds (Magneto, Red Skull, Kingpin, Mandarin, Doctor Doom and the Wizard). Want to know more about it? Go to it's record at the Appendix of Marvel Universe, or find our own Cosmic Spider-Man/Acts of Vengeance review for Spidey's adventures during that gigantic Marvel crossover.

Bottomline (what you need to know for this profile), there's something called the "Enigma Force" that imbues a champion with the power of Captain Universe whenever humanity is in danger. Acts of Vengeance endangered it, and Spider-Man was chosen as the champion, so he got cosmic powers. When Loki was finally defeated by Thor, and his group disbanded, he left Earth a farewell gift: he merged three Sentinels who were property of Sebastian Shaw, a mutant, enemy of the X-Men, into one (Amazing Spider-Man #329). The new mechanical creature, the Tri-Sentinel, was programmed by Loki to destroy the nearest nuclear power plant, so he went to the one in Amity Point. With cosmic Spidey being unable to gain an advantage, Shaw activated the self-destruct mechanism in his sentinels. The Tri-Sentinel was a robot impregnated with magic, so, after a few seconds standing still, he started moving again. Fortunately, those few seconds were enough for Spidey to focus on an energy blast that reduced the Tri-Sentinel to scraps. After that, humanity was no longer in danger, so Spidey lost his cosmic powers.

22 issues later, in Amazing Spider-Man #351-352, Michelinie brought back the Tri-Sentinel. The Life Foundation, an organization that believes in WW3, and in the collapse of global economy, and also sells luxury houses in secure bases to rich people who think they'll need it. The Tri-Sentinel was meant to be the security part. They recovered the remains of the robot, and used an electromagnetic field to prevent him from fully regenerating. Then, they installed a sealed container with Antartic Vibranium inside the robot's head. Vibranium is able to melt any metal nearby, and the container should open when Carlton Drake, frontman of the Life Foundation, flicked a switch. When activating the robot, it rejected the new directives, and re-instated Loki's. Of course, once again the Tri-Sentinel was able to block the signal to the container, preventing the self-destruction. Spider-Man and Nova got the task of tackling him (they were both inside the Life Foundation's base). Spidey got inside the robot's head, while Nova tried to slow him down on the outside. Inside, Spidey had to avoid the defense mechanisms of the Sentinel, and was able to disable the flying ability. With it on the ground, Nova was still helpless to stop it, until he used the magnetic cannon of a Foundation aircraft. The Sentinel stopped for a few seconds, but his regenerative powers were enough to render the magnetic ray useless. Fortunately, that nick of time was all that Spidey needed to break through it's control center and manually open the Vibranium container. As he fled, the Tri-Sentinel's regenerative powers were losing the battle to the Vibranium. The Sentinel melted before reaching a heavily populated area.