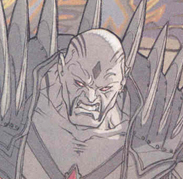 In the early days of Spider-Mans career, Mister Sinister hired Kraven the Hunter to collect DNA samples of the original X-Men. Kraven achieved this end unbeknownst to the X-Men at the time during a battle with them and Spider-Man outside the popular Coffee Bean bar. After returning the samples to Sinister, Kraven later provided his employer with a sample of his own DNA in exchange for further payment.

Years later following Kravens suicide and a series of unsuccessful clones of the original X-Men, Sinister resolved to acquire a sample of the Carnage symbiote believing it could stabilize his clones. Inside Ravencroft Sinister promised Carnage freedom in exchange for a sample of his alien half. Carnage obliged before Spider-Man (Ben Reilly) & the X-Men arrived to contain Carnage as Sinister fled.

After distilling the symbiote to a point where it no longer had any sentience but retained its genetic adaptability, Sinister now had all the ingredients needed to create a super clone he could use to dispatch of the X-Men.

A few years later Sinister unleashed his creation. Forged in the image of Kraven & Sinister, Xraven possessed the DNA and powers of the original X-Men to varying degrees coupled with the DNA and unique abilities of the legendary hunter. The creature honed its skills killing off a chunk of the mutant group the Morlocks before taking the fight to the X-Men on their home turf; - teleporting inside Xavier mansion whilst Spider-Man was present.

Acting on orders to collect DNA samples of all remaining mutants, Xraven proved to be more than a match for the X-Men and Spider-Man until Cyclops encouraged him to look into his mind and observe Sinisters true nature. Understanding he would only ever be seen as a slave by his creator, Xraven teleported back to Sinister to turn on him as the two engaged in battle. Xraven’s fate is unknown.